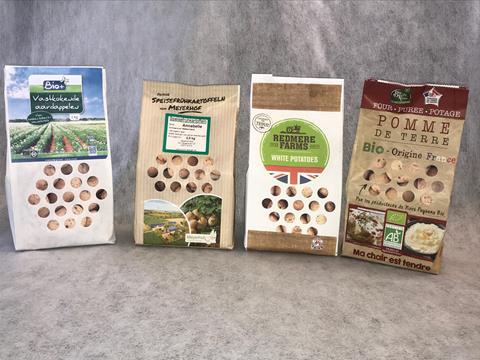 An adaptation of ILAPAK’s flagship Vegatronic 6000 bagmaker, the new system can run off paper pillow packs and pouches that can apparently be fully recycled via kerbside collection.

“Our engineers have modified the forming tube and sealing system of the Vegatronic 6000 to enable us to run an innovative paper film. With the likes of Tesco keen for suppliers to pursue paper packaging, we are anticipating massive interest in this new system. It is a fraction of the cost of other paper packaging machinery offerings plus it gives users the option of running original films on the same machine,” says Tony McDonald, sales and marketing director at ILAPAK UK.

Pressure on the food industry to reduce non-recyclable packaging has intensified in the past year, and one response has been to move from non-recyclable plastics to recyclable PE for some flexible applications. However, these plastics have to be taken to bag collection points for recycling and the UK’s infrastructure for processing these materials is over-capacity, according to the company. Therefore, in recent supplier discussions, supermarkets such as Tesco have expressed a preference for paper films that can be recycled via household waste collections.

The challenge with developing paper film that can run on bagging equipment is that it requires some plastic content to ensure a successful seal. If the paper film is to meet the EN standard for recycling, plastic content must be restricted to below 5% by weight, although the paper and paperboard industry is reportedly targeting no more than 3%. Most paper-based films available on the market today are in fact non-recyclable composite multi-layer laminates with the appearance of paper, according to ILAPAK.

Working together with ILAPAK, Dutch packaging manufacturer Van der Windt Verpakking in cooperation with its printer Cartomat, has successfully developed a paper film called CartoPaper® that uses a special water-based non-extruded coating to support both sealing performance and compliance with the European standard EN643.2. A reported paper content of at least 95% means this paper can be recycled.

Using the industry-leading Vegatronic 6000 as its starting point, ILAPAK has engineered a progressive bagmaker that can accommodate this film to produce recyclable paper packs for a number of industries, including fresh produce, baked goods, confectionery, and pet food.

The main challenge of running paper on a vertical bag maker is that it is very prone to creasing, which can make it hard to produce a pack with straight lines and a perfectly formed gusset. The key to overcoming this issue is to hold the paper firmly in position and prevent it from creasing prior to sealing. ILAPAK’s engineers achieved this by modifying the forming tube to make the film path through the forming shoulder and the remounting system smoother with less acute approach angles.

The sealing system on the Vegatronic 6000 also had to be re-engineered. Usually, when sealing a plastic film, heat is applied to a ‘hotspot’ in the centre of the sealing area, spreading outwards from there. This means there can be a temperature variation of 15-20°C across the sealing surface. Paper is a more heat-sensitive material which requires heat to be applied uniformly across the sealing area. ILAPAK has utilised specially treated sealing jaws in conjunction with super-conductor technology to ensure quick and even transfer of heat.

“The only other systems that we are aware of for packing in paper films are considerably more expensive – up to four times the cost of our machine – and are dedicated to that application, so they don’t offer the same substrate flexibility. Our system is interchangeable in that it can switch between paper and any original films and complex laminates without any changes other than adjusting the temperature via the control panel. Furthermore, whereas some baggers on the market can only manage 20ppm on paper applications, our system can maintain normal production speeds,” claims Tony McDonald.