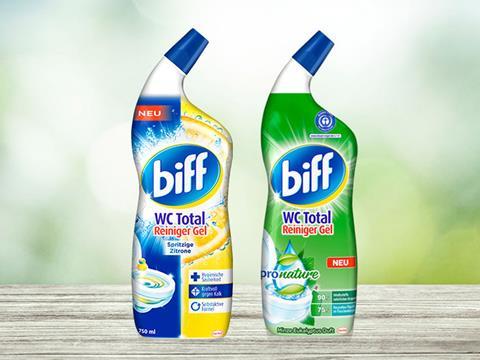 The amount of recycled polyethylene (rPE) in the packaging for Henkel’s toilet cleaner gels has been increased – reaching 50% for toilet cleaners in the standard range, for example from the Biff brand, and, in the case of cleaners from the Pro Nature range, as much as 75%. The material used is recycled plastic from end-user households.

“It is an important step for us that we have been able to increase the proportion of recycled PE in our toilet cleaners so significantly. After all, the availability of high-quality recycled materials of this plastic is still limited,” comments Ulf Timmann, head of global packaging innovation for Henkel’s toilet care and hard surface cleaning operations.

“The success is at the same time a motivation. Our goal is to even further increase the proportion of recycled material in our packaging,” Timmann adds.

In addition to increasing the use of recycled plastic, Henkel has also reduced the weight of the bottles by 11% - reportedly saving 480,000 kilograms of new plastic per year. According to the company’s calculations, this corresponds to a saving of 800 tons of CO2 annually.

Henkel also claims that the new compact bottle design allows around 10% more bottles to fit on a transport pallet, which saves on CO2 during transport.

With its new packaging concept, Henkel has introduced a standardized bottle body design for its toilet cleaners worldwide. All bottles are now available in a uniform format and have polyethylene as a material, and have been available in stores since January this year.

Henkel hopes that this redesign will help it to achieve its packaging targets, with a central pillar of this being the company’s goal of reducing the amount of virgin plastic from fossil sources in its consumer product packaging by 50% by 2025.

In the hopes of reaching this goal, Henkel is aiming to increase the proportion of recycled plastics in its products to more than 30% by 2025, reduce absolute plastic volume, and increase its use of biobased plastics. In addition, the company says that 100% of its packaging will be recyclable or reusable by that time, while by 2040, it aims to have become “climate-positive”.