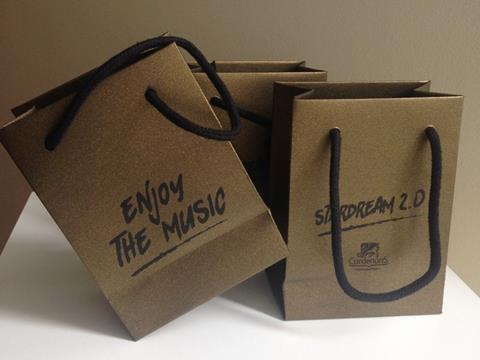 From the launch pad of Luxe Pack Monaco 2017, STARDREAM 2.0, the new addition to Pearl&Dream by Gruppo Cordenons,, is now orbiting the creative paper galaxy.

As the brightest of the stars, STARDREAM 2.0 gives its special effects to every project, designed to shine with its own light: sparkling packaging, luminescent consumer products, pearlescent editions... creative works projected into the hall of fame of successful applications.

As part of the evolution of the well-known STARDREAM brand, version 2.0 has the distinctive feature of outstanding pearlescent and shimmering effects that change depending on exposure to light. Gruppo Cordenons’ R&D department has worked to make STARDREAM 2.0 not only brighter, but also to give it a higher bulk. In addition to its beauty, STARDREAM 2.0 also shines with its eco-friendly features: it is produced with 40% post-consumer waste fibres.

The new STARDREAM 2.0 colours complete the wide range of pearlescent papers by Gruppo Cordenons: in addition to the hypnotic icy white of ERIS and the delicate white/blue of PLUTO, the new paper is available in the shimmering black/blue of NEPTUNE, the elegance of SATURN bronze and the warm gold of VENUS. STARDREAM 2.0 is offered in three grammages: 110 gsm (one-side coated), 200 gsm and 340 gsm (both two-side coated) weights.

"To promote STARDREAM 2.0 we have chosen a concept that links the universality of visual communication languages, of which paper is a key element, to music. – says Katia Tedeschi, Marketing Director of Gruppo Cordenons – The visual book created for the new paper combines the double meaning of the word star: it is inspired by celestial bodies as well as by popular rock stars such as Freddie Mercury, David Bowie and Madonna. Distributed at its world premiere at Luxe Pack 2017, it is designed to enhance the STARDREAM 2.0 features with various printing and finishing techniques. It contains quotes from music tracks combined with visual references of the artists that made them famous".