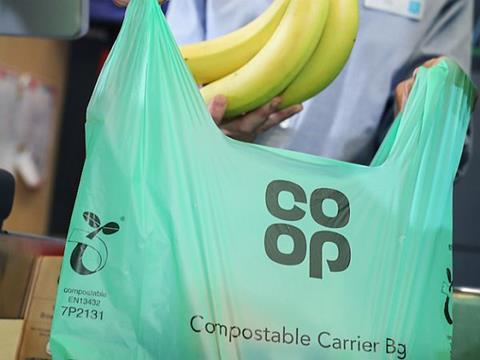 The Co-op and Novamont have announced a collaboration aimed at supplying the British retailer with a new kind of compostable carrier bag, as an alternative to traditional non-biodegradable and non-compostable plastic bag.

The move is part of a new hard-hitting ethical strategy launched on 27 September by the Co-op, which will see around 60 million traditional single use plastic carrier bags, equal to 340 tonnes of plastic, removed in a phased rollout.

The community retailer’s blue-print sets out how the Co-op will ban single-use own-brand plastic products and reduce its overall use of plastic packaging within five years and stop using hard to recycle materials, like black plastic.

Lightweight compostable carrier bags, which can be used to carry shopping home and then have a secondary use as a food waste caddy liners, will be rolled out to almost 1,400 Co-op food stores, initially in towns, cities and villages where the bags are accepted in food waste collections and, along with the food waste, can be turned into peat-free compost.

The not-for-profit new bags will be of the same size, strength and price (5p) as their traditional single use plastic counterparts and were developed as part of a close cross-supply chain collaboration which also included the bag manufacturer and UK distributor. Co-op will be speaking with the remaining local councils with support from the Novamont UK based waste market specialist to seek to extend coverage to more stores. This is a key objective to help support increased consumer participation in local authority food waste recycling schemes. Novamont will also provide consumer communications support based on its experience with other major retailers in Europe who use mater-bi compostable carrier and produce bags.

Iain Ferguson, Environment Manager, Co-op, said: “Our members and customers expect us to help them to make more ethical choices, and we are dedicated to doing just that. The bags are carefully designed to help local authorities with food waste recycling, supporting their community and resident engagement and reducing plastic contamination in a targeted way. With Novamont, the Co-op have found a partner renowned for the quality of its Mater-Bi bioplastics and expertise in providing certified compostable bags and support to many global retailers.”

Novamont’s CEO Catia Bastioli said: “Novamont was built on the principles of the circular bioeconomy, the industrial regeneration of local areas and the production of bio-based and compostable materials alternative to traditional plastics from fossil sources. This Co-op initiative provides a notable application for major regions in the UK such as Greater Manchester to help support a system of organic waste collection and management where household food scraps become a resource again through industrial as well as home composting, as already implemented in cities such as Milan, Copenhagen, Geneva, New York, Paris and San Francisco.”

The Co-op’s pledge on plastic will see all its own-brand packaging become easy to recycle by 2023. It has promised to use a minimum of 50% recycled plastic in bottles, pots, trays and punnets by 2021. All own-brand black and dark plastic packaging, including black ready meal trays, will be eliminated by 2020.

Almost three out of four products that the Co-op makes are now widely recyclable, which accounts for 95% of its products when measured by weight. It has reduced hard to recycle plastics, such as pizza discs, sushi bases and cooked meat packaging but promises to go further. Its reductions in plastic use, combined with its new pledge on carrier bags, is the equivalent to 125 million plastic water bottles being taken out of production.

With its Mater-Bi line of bioplastics and an annual production capacity of 150,000 tons, Novamont is today the world-leading manufacturer of these new materials. The company has already revitalised five chemical plants which had been decommissioned or were about to be dismantled in Italy. The main fields of application of the company’s biochemicals are packaging, separate organic waste collection, retail purchasing, disposable tableware, farming, cosmetics and automotive. The firm produced biodegradable tableware for the 2012 Olympic Games and has already worked with local councils (including some London boroughs) engaged in the separate collection of bio-waste.

Other than the UK, Novamont has commercial offices in Germany, France and the United States and operates through its own distributors in Benelux, Scandinavia, China, Japan, Canada, Australia and New Zealand. The company has its headquarters in Novara (near Milan, Italy), a portfolio of 1,000 patents, 600 employees and a global turnover of €195M (2017). Novamont is a Core Partner of the Ellen MacArthur Foundation’s New Plastics Economy initiative aimed at rethinking plastics packaging systems globally.