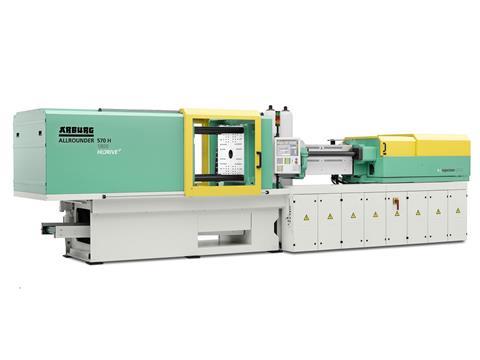 By its own account, the Drinktec, which will be held from 11 to 15 September 2017 in Munich (Germany) has become the leading international trade fair for the drinks and liquid food industry. On its Stand 323 in Hall A4, Arburg will present the performance capabilities of the Packaging version of its high-speed hybrid injection moulding machines.

At the Drinktec 2017, Arburg will demonstrate its injection moulding technology which has been specially optimised for the packaging industry, particularly for fast sequence and high-cavity moulds. The exhibit, a packaging version of the hybrid Allrounder 570 H, has a clamping force of 1,800 kN and a size 800 injection unit. Twenty-four drink bottle caps will be produced in a cycle time of only 2.7 seconds on a high-performance mould from Z-moulds. The weight of the HDPE moulded parts is 1.25 grams.

A vacuum conveyor and a direct colouring device ensure a correspondingly high throughput. Quality monitoring is carried out in-line using an optical system.

The hybrid Allrounders of the Hidrive series impress with their connection of hydraulic and electric machine components for high performance. They work very cost-effectively and remain highly productive and energy-efficient. This is ensured in particular by the combination of high-speed servo-electric toggle, electric dosing and hydraulic accumulator technology. This facilitates accurate, dynamic injection at a high performance level. Simultaneous machine movements ensure reduced cycle times.

The special combination of "distance between tie bars, clamping force and opening stroke" in the Packaging version is tailored to the efficient mass production of packaging articles. An important feature for high-speed operation is powerful ejection, which is synchronised with the mould movement and ensures the particularly precise and reproducible falling of moulded parts. Further features include extremely short dry cycle times for the servo-electric toggle-type clamping unit with energy recovery during deceleration and the simultaneous production processes programmable via the Selogica control system, such as dosing across cycles.

The machine base is designed for very high loads, while the FEM-optimised mounting platens combine high rigidity with low weight. The highly wear-resistant cylinder modules are equipped with position-regulated barrier screws.Special features are available for the production of thin-walled parts and screw caps, enabling the Packaging machines to be individually tailored to the relevant application.