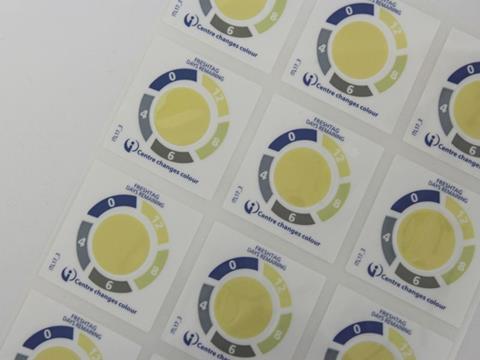 Back in the UK, academics at the Imperial College London have developed paper-based, smartphone-linked spoilage sensors for meat and fish packaging. The researchers say the new sensors, made by printing carbon electrodes onto cellulose paper, could help detect spoilage and reduce food waste for supermarkets and consumers.

Dr Firat Güder and Giandrin Barandun from the Department of Bioengineering at the Imperial College London explain the benefits of these new laboratory prototype sensors which are known as ‘paper-based electrical gas sensors’ (PEGS) and are designed to detect spoilage gases like ammonia and trimethylamine in meat and fish products.

“Many freshness sensors already on the market rely on chemical reactions that lead to a colour change. However, judging a colour change is a subjective measure. Our sensor gives an electrical signal which can easily be used in digital data processing. The RFID tags into which the sensors will be integrated in are already used in packages for many different foods and other goods, for example for security or information purposes. This makes it very easy to add our sensors to the packaging process. Our sensor is also suitable for very humid environments.”

The tags are powered wirelessly by the smartphone once it comes close, i.e less than ten centimetres, to the tag, enabling the smartphone and the tag to communicate, as Dr. Gürer explains.

“This technology, near-field-communication (NFC) is already commonly used for contactless payments or public transport, such as on the Oyster card in London.”

The researchers say that the sensors integrate easily in existing RFID tags on packs, but that protecting the sensors is something that still needs to be looked at.

“The sensors should not get in contact with the food or any liquid, as this would alter the readings of the sensor. We are looking at ways to protect them by adding a gas permeable, waterproof layer to protect the sensor. Packaging manufacturers already use many layers of different plastics to optimize their packs for retailers’ needs.”

The sensors, which were manufactured in the lab for a cost of under £0.02, were tested with cod fillet and chicken breast.

“In general, they can detect all water-soluble gases but are most sensitive to ammonia (NH3) and trimethylamine. These are the nitrogenous products of protein decomposition by bacteria. That said, our sensors can be used with any food that is packed in a sealed atmosphere, where the relative humidity is over 50% and there are some nitrogenous compounds accumulating from bacterial activity. The materials are biodegradable and nontoxic, so they are safe to use in food packaging. We feel that they could eventually replace 'use -by' date,” says Mr. Barandun.

The scientists used ballpoint pens and robotic cutters to create the first prototype sensors and believe in its scalability.

Dr Güder concludes: “We believe our simple technique could easily be scaled up to produce PEGS on a mass scale by using existing high-volume printing methods such as screen printing and roll-to-roll printing.”