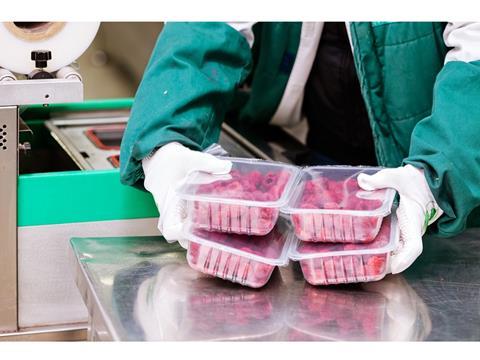 Brillopak (stand C24) has chosen PPMA 2017 as the setting for the UK premiere of its new fresh produce punnet loading line, Meteor. It is the first food packing end-of-line system in the UK to integrate Omron’s new four-arm Delta robot, Quattro – the fastest and most dexterous robot in the world.

OEM Brillopak, specialise in developing innovative end-of-line packing machines to load fresh produce packs into retailer crates. Unlike most traditional robotic loading systems which pick and place punnets in layers, Meteor loads individual punnets into retail crates at speeds of up to 150ppm and with a new degree of dexterity that no layer-based robot handling system can achieve.

Brillopak Director David Jahn explains how they were approached by a leading UK fresh produce retailer wanting to eliminate packing interruptions: “Lines that handle fresh produce such as fruits, vegetables or meats, are usually highly automated. As they continue to become faster and more efficient the higher throughput places a strain on the end of line packing function. Traditionally, this process is achieved by accumulating the packs and picking and placing products into crates in layers, but if one punnet is dropped or falls off the line, the interruption can cause severe periods of downtime and waste.”

Although end of line packing is automated to some degree, as processing lines become faster there is an increasing need for manual labour to help match the line speed. However, it’s becoming harder to recruit front-line staff and Brexit is set to make this situation even worse. Even when workers are available, the rising minimum wage also brings an additional expense. “Speed and dexterity is critical if our British retailers and packers are to automate their end of line packing processes. Flawless loading with minimal line interruptions can only be achieved with a single product pick – it’s the safest way to load a wide range of retail crates accurately and why we developed Meteor,” adds David.

The Meteor system picks and places individual packs at a top speed of 150ppm. As well as incorporating the fastest Delta robot in the world, Omron’s Quattro has a four-arm axis design allowing it to reach 30% further than similar sized robots and tilt the load, making it much more flexible – ideal for placing packs in tight spaces, such as punnet crates.