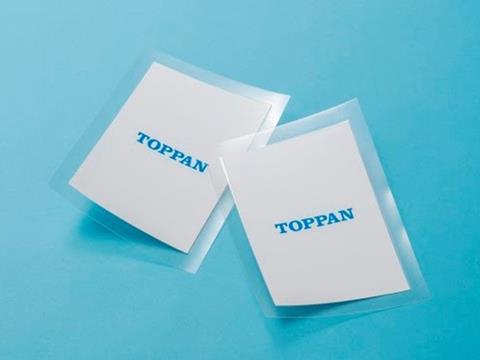 Toppan Printing, a global provider of integrated solutions in the fields of printing, communications, security, packaging, décor materials and electronics, has developed a fire extinguishing film that responds to heat by emitting aerosol particles.

The new film is an addition to Toppan’s “SMART LIFE-VALUE Packaging” line-up, which is part of the recently launched “TOPPAN S-VALUE Packaging” range. It will be on sale from February and will be targeted at manufacturers of batteries and electrical appliances.

With applications for rechargeable batteries expanding to such fields as mobile devices and mobility, lithium-ion batteries are becoming more widely used and can offer higher power levels. However, this increases the risk of fire-related accidents, not only during use but also after disposal.

Toppan has combined its advanced coating technologies and transparent vapor-deposited GL BARRIER film with a fire extinguishing agent from Yamato Protec Corporation to produce an adhesive film that it says has “outstanding” long-term durability and workability.

The company reports that its film is effective in extinguishing fires at an early stage or preventing their spread in the event of equipment problems and short circuits.

Potential applications include attachment to the inside of lithium-ion battery cases, switchboards and power distribution equipment, outlet covers, or waste containers at public facilities. The film apparently uses no substances that pose a risk to humans or the environment and produces no harmful gases when it is activated.

“This film enables greater fire safety without any negative impact on people or the environment,” said Yoshimitsu Anamizu, managing executive officer of Toppan’s living and industry division. “We intend to develop more products based on this technology to contribute to accident and disaster prevention and a safer, more sustainable society for everyone.”