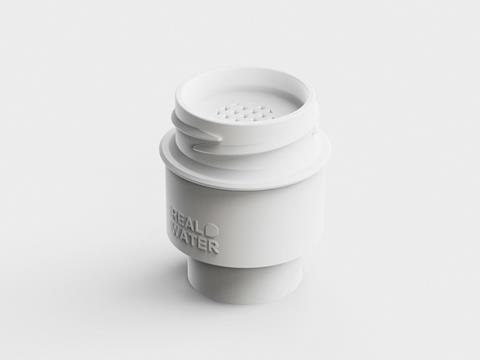 A 2018 study from the State University of New York found that tiny pieces of plastics exist in more than 90% of the samples collected from the world's most popular bottled water brands. To conduct the study, 259 bottles of packaged drinking water of 11 different brands were collected as samples from nine different countries.

After the results of the study were made public, the World Health Organization (WHO) sought a review of the potential risks arising from plastic particles in drinking water. The study concluded that, on average, a person can consume 2,000 microplastics in a week - amounting to around five grams.

Real Water was started by Kwon Hyeok Jae, who developed the product with the goal of addressing this issue. Kwon and his team came up with the final product after ten months of research. The team studied microscopic plastics' size, investigated available filters in the market, and studied the characteristics, pore sizes, and principles of each filter before finally introducing the cap.

Real Water's filter cap, which can reportedly be fitted on to most commercially available plastic bottles, is able to filter around 120 litres of water in its lifetime. If, on average, a person drinks two litres of water a day, the cap will last for two months.

The solution has received the 'Hazardous Substances Non-Detection Certification' after undergoing the Korea Testing and Research Institute's testing processes. Also, it has been confirmed as 'Bisphenol A non-detection' as a result of the Korea Institute of Construction Living Environment Test and has received 'BPA FREE' certification.

"Our company's motto is 'Make water that can be drunk with real peace of mind.' In addition, the issue of microplastics in bottled water is more serious overseas than in Korea. Some brands abroad have up to 10,000 microplastics per litre of water. As the demand is high, we are preparing to enter the overseas market in earnest," concludes Kwon Hyeok Jae.