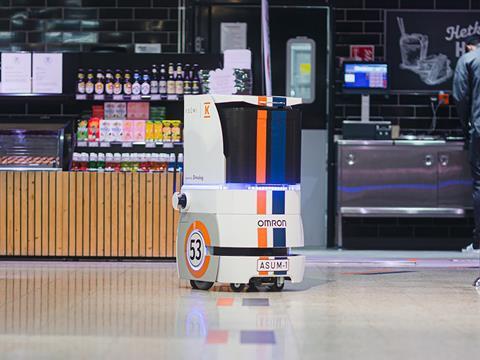 An autonomous mobile delivery robot has recently been seen moving around the corridors of the REDI shopping centre in Kalasatama, a neighborhood in Helsinki, Finland.

As part of a larger experiment called ‘Six City Strategy: New solutions in city logistics’, the project aims to look at possible options for last-mile deliveries in Finnish cities and consider solutions to organise urban logistics in the lightest, most sustainable, and most efficient way.

The trial was arranged by Forum Virium, the City of Helsinki's development company, in conjunction with construction company SRV. Other organisations involved in the project include elevator company Kone; the K-Supermarket in the REDI shopping centre; Asumi, a digital resident service platform; and design studio Muotohiomo.

For the trial, the OMRON mobile robot was programmed to deliver items of food from the shopping centre to apartments in the nearby Majakka tower block.

OMRON, Dimalog and Muotohiomo worked closely together to refine the operation and design of the robot so that they met the specific needs of the project. To move around successfully, the robot had to navigate the supermarket and tower block corridors, as well as use elevators and service tunnels. As it moved, the robot both whistled and talked in Finnish, using a speech synthesiser.

Lotta Toivonen, development manager for housing services at SRV (which built both the shopping centre and the Majakka tower block), comments: “The idea of whistling is that it’s a funny thing. On the other hand, people realise that the robot is coming. It speaks a bit, and people greet it. It is treated as if it was a person.”

Kaisa Spilling of Forum Virium, adds: “It’s been fun to see how people along the way feel like it’s human. It might say in the elevator: ‘I’m sorry I would like to get out here’ or ‘Oops, the elevator is full, I’ll ask to use another elevator.’”

So, how did the trial work? Each delivery started with the receipt of an online order from a customer using the Asumi platform. Orders could also be placed through the supermarket by the shopping centre's smaller businesses.

The items (mainly meals) would be collected at the supermarket and loaded by staff into the robot, which would then deliver the order to the relevant business or apartment. The customer would receive an automatic notification as soon as the robot delivered the item. Kaisi Spilling remarks: “During the coronavirus epidemic, the robot has brought lunches for homeworkers. Lunchtime has been fully booked.”

Throughout the trial, the robot could request an elevator itself but needed an escort to open any doors that might have to be kept closed due to fire safety regulations. The escort was a university service design student, who reported any problems encountered by the robot and observed its interaction with people.

The robot used on the trial was an OMRON LD model - a self-navigating autonomous mobile robot (AMR). OMRON says that, unlike traditional autonomously guided vehicles (AGVs), its mobile robots don’t need any expensive modifications to facilities (such as floor magnets or navigational beacons).

They navigate by the natural features of the facility, having been designed to move material within challenging environments that might include confined passageways, as well as locations where there might be people moving around. OMRON’s software also integrates with a company’s other systems so that the robots can become operational in minimal time.