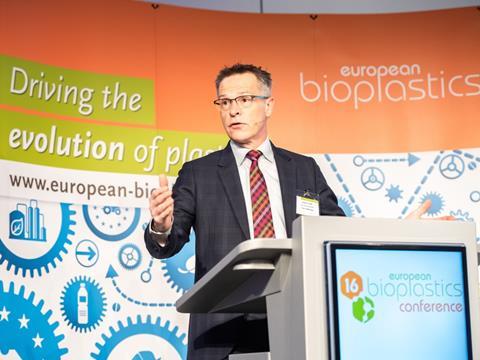 The European Bioplastics Conference ignited discussions on the “significant” role bioplastics will play in achieving the goals of the European Green Deal, the need for clearer and fairer legislative frameworks, and the growth the industry is likely to experience in the coming years. Packaging Europe examines some of the key insights from the Conference and what these mean for the packaging industry.

In its 16th year, the European Bioplastics (EUBP) Conference was a hybrid event, with around 140 attendees in Berlin and another 180 – including Packaging Europe – following online between the 30th of November and the 1st of December 2021.

“There are many fields of interaction between the European Commission’s Green Deal and bioplastics where our industry can make significant contributions towards helping achieve the European Union’s ambitious climate goals,” de Bie explained. “Bioplastics are part of the solution needed to fix the issue that we have with plastics today.”

Sadauskas was perhaps more cautious in his address: “In the New Circular Economy Action Plan, the Commission has confirmed the need for plastics to become fully circular. While bio-based and biodegradable and compostable plastics can be part of the solution, they also present certain challenges.”

Under the umbrella of the Green Deal, the EU’s Directive on single-use plastic (SUP) and the Packaging and Packaging Waste Directive (PPWD) were both raised in relation to applications for bioplastics. Examining the implications of such legislation during the first session of the Conference, Francesca Stevens, managing director at EUROPEN, acknowledged that the packaging industry, in particular, was “under the spotlight”

Additionally, recent results of a study developed by the European Commission’s JRC came under fire. The European Bioeconomy Alliance’s statement on the new methodology for life cycle analysis (LCA) from the JRC coincided with the Conference’s opening day. With Hasso von Pogrell, the managing director of EUBP, claiming in the statement that the LCA methodology “clearly favours conventional plastics made from fossil resources”, it was perhaps unsurprising that this session was so vigorous.

Erwin Vink from NatureWorks, for example, gave a detailed breakdown of where the JRC’s methodology seems to fail the bioplastics industry. On one slide, Vink presented a table outlining the JRC’s requirements on data reporting: there are allegedly 8 pages of specific requirements for bio-based polymers compared to just 2 pages for fossil-based polymers.

A view shared by much of the bioplastics industry is that a unified, harmonised, and realistic approach to policy and guidelines is needed. Sadauskas, for example, cited recent industry feedback calling for clearer definitions and frameworks – an issue returned to throughout the Conference.

However, there appears to be a lack of consensus on where such frameworks should come from or what they might look like. One complication is the need to ensure definitions for the biodegradability and compostable status of bioplastics do not ignore the nuances of different materials, applications, and end of life conditions.

Speaking on biodegradable plastics in the open environment, Miriam Weber from HYDRA Marine Sciences examined the difference between the laboratory and field half-lives of bioplastics. She emphasised the need to adapt the timeframe of biodegradability tests with the performance requirements of the material in mind, to avoid misrepresenting the results.

This is particularly important for the packaging industry, where applications range from on-shelf food contact to long-haul transit of automotive parts. Therefore, biodegradability and compostability tests need to account for the length of time bioplastic spends in each segment of its lifespan if such definitions are to serve the packaging industry with transparency.

Food packaging was a particular focus – again unsurprising in light of recent topics of conversation and controversy in Europe, including the French Government’s ban on SUP for some fruits and vegetables, starting in January 2022. Marco Versari spoke about waste collection in Italy, with a focus on how Biorepack is using packaging, labelling, and infrastructure to develop and support the proper collection of food waste. Similarly, on behalf of the Fabbri Group, Stefano Mele examined the importance of working with retailers and fresh food processors, and of integrating machinery, materials, and services, in order to protect and preserve food through packaging.

Looking to the future, new feedstocks were the focus. For example, Total Corbion PLA’s representative, Derek Atkinson, spoke about some of its circularity strategies, particularly sugarcane that can be converted into lactic acid and then polylactic acid. Atkinson provided a number of examples for the end of life of products manufactured with this polylactic acid – including industrial composting, energy recovery, mechanical recycling, and chemical recycling – and suggested that the combination of these approaches made this both a bio-based and biodegradable bioplastic. Another novel feedstock presented in this session by Scarpa and Arkema was castor seed.

According to a number of speakers, many of the policies and technologies that will help the EU to reach net-zero emissions have yet to be invented. Nonetheless, attendees seemed hopeful that bioplastics advancements would be made as early as next year’s conference.

Based on research from the nova-institute, EUBP stresses that bioplastics production is expected to triple within the next five years – with a significant growth rate of over 200%. This is supported by recent research from Appleyard Lees and the European Patent Office, both pointing to a surge in the industry based on global patent activity.

The Conference’s overarching consensus was that bioplastics have significant potential – and that it is well worth investing in and expanding on that potential without ignoring its challenges. Bioplastics are not always the answer, but the speakers and attendees of the EUBP Conference agreed that they should not be eliminated from the conversation.