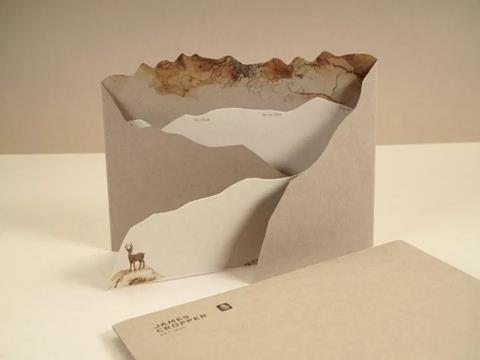 James Cropper has released a coloured paper range, Wainwright Colours from Nature, using dye derived from plant extracts that would have otherwise been wasted.

According to James Cropper, the new range marks the first application of plant-based dyes to paper. Plant-based dyes are apparently more common in the textile industry, with James Cropper seeking to launch an innovation for the paper industry that creates similar value from waste streams that are from renewable origins, inedible, and can be replenished responsibly.

The first two shades, Limestone and Herdwick Brown, are both derived from rosemary residue, a waste stream from some food production. The company says the rosemary is grown as an annual agricultural crop before the non-edible waste from the plant is extracted and upcycled into dye, which is added to its FSC-certified recycled paper.

James Cropper claims that extensive research and development has ensured no compromises have been made on the technical performance of the paper range. The Wainwright Colours from Nature collection reportedly offers a bleed-free, rub-resistant dye that has lightfastness similar to that achieved using industry-standard synthetic dyes.

In addition, the colours were created to celebrate James Cropper’s partnership with The Wainwright Prize, an annual literary award for the best UK-based nature and global conservation writing. The colours are inspired by Alfred Wainwright’s love for the Lake District landscape, according to James Cropper.

James Cropper has previously launched the Rydal Packaging Collection, which includes a packaging paper option using 100% post-consumer waste recycled fibre. The collection also has a literary connection, named after a small village in the Lake District known as the home of poet William Wordsworth.

“From the use of renewable materials and low impact manufacturing processes, to producing high quality products that are easy to recycle, we are committed to sustainability at every turn, and our expertise in colour is part of that. “

“It’s the first-time plant-based dyes have been used in modern papermaking; a breakthrough which marks the first step into the development of more natural colour options. We are investigating botanical dyes extracted from a wide variety of origins including plants, shells and fungi; and expect the range to expand significantly.”

The Wainwright Colours from Nature range is available from stock in 350gsm, which the company says is ideal for presentation packaging, business stationary, and invitations. The natural dye technology can also be applied to bespoke projects through James Cropper’s Tailor Made service.