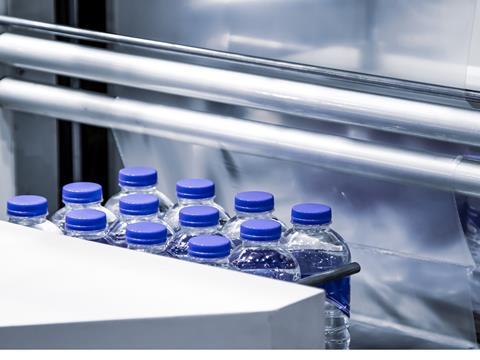 The company’s Exceed XP 7021 and Exceed XP 7052 reportedly offer the value chain attributes that it claims are not available in other resins on the market.

The Exceed range can be used for stretch hood films, combining HEVA-equivalent elasticity with a high holding force for pallet stability that promotes product protection and safety. ExxonMobil says that the films made with its Exceed range also deliver low haze, improving barcode and QR reading capabilities, and high puncture and dart resistance for less breakage.

“Although the film was co-extruded, it is a mono-material PE film contributing to its recyclability.”

According to Vinck: “Flex-crack resistance is so high, tests undertaken by ExxonMobil resulted in an average of 1 hole per ten thousand cycles.

“The combination of fractional MI and a 0.912 g/cm³ density helps prevent seal thinning without the addition of LDPE when compared to conventional sealing resins.”

In addition, collation shrink films that use the Exceed range can be applied at temperatures as low as 120oC, which could decrease energy use and provide energy savings while protecting products from excessive heat, according to the company. This can also reduce the need for cardboard trays in some applications.

“Films which exhibit MD and TD shrinkage at low temperatures, and can be processed on traditional blown film lines, are a rarity in the market,” Vinck says of coalition shrink films that were produced using the Exceed range.

The new range of PE grades can also be used by convertors for greenhouse films, which apparently combine softness and clarity with dart and puncture resistance for improved integrity. The company alleges that these greenhouse films can reduce the risk of breakage during installation and use.

Vinck adds: “Films made with these new grades offer farmers the opportunity to enjoy longer and better growing conditions for potentially higher crop yields, helping to meet the growing population’s need for food.”

Earlier this year, ExxonMobil unveiled its Paxon HDPE grade, SP5504, which it claims is a “paradigm shift” in the properties currently associated with unimodal HDPE resins on the market, with a step-change to ESCR performance without compromising overall performance.