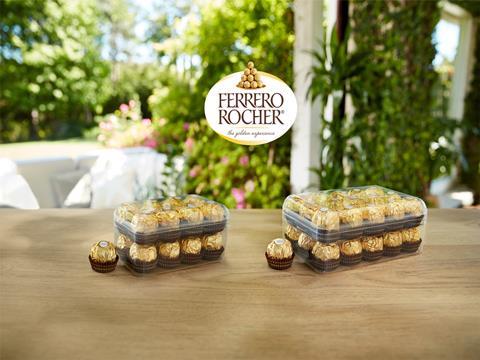 Confectionary brand the Ferrero Group has announced that its Ferrero Rocher chocolate range will have a recyclable box, as part of its commitment to making 100% of its packaging reusable, recyclable or compostable by 2025.

The Ferrero Group says its “new eco-designed boxes” are the result of a partnership between its research and development team and materials experts at Milliken. As part of this collaboration, the companies apparently developed and trialled over 29 different plastic resins.

According to the Ferrero Group, the final design will be made from PP, which it claims is easier to recycle globally. The company adds that the box will maintain its transparency as part of its “iconic” design.

Fabio Mora, global packaging director at the Ferrero Group, says: “Packaging is a complex issue [and] we are committed to working in close collaboration to build a more circular economy through packaging-related strategies, joining forces with governments, manufacturers, suppliers, waste disposal management companies, NGOs and others.

“In this instance, we worked in close partnership with Milliken who brought their innovative and critical thinking to help reduce the environmental impact through the use of a new polypropylene material for the Ferrero Rocher box.”

The company will introduce the new boxes in a phased roll-out around the world, starting from September 2021. The first products to be transitioned, says the Ferrero Group, will be its compact 16- and 30-piece boxes.

The company says that it intends to scale up the new designs to the rest of the Ferrero Rocher portfolio over time. When the project is complete, it will allegedly contribute to an estimated 10,000 tonnes less plastic used.

Earlier this year, the Ferrero Group announced new partnerships, including with HolyGrail 2.0 and the Consumer Goods Forum (CGF), as part of its sustainability commitments. The re-design of its Ferrero Rocher range represents ongoing efforts by the company to meet circularity goals.

Jerome Gray, president of global marketing at the Ferrero Group, adds: “We are proud to make this important stride in our journey towards more sustainable packaging, as part of the Ferrero 2025 packaging commitment.

“Our consumers can enjoy and savour Ferrero Rocher with their loved ones, while being confident that we are doing our part to reduce the impact of our packaging.”