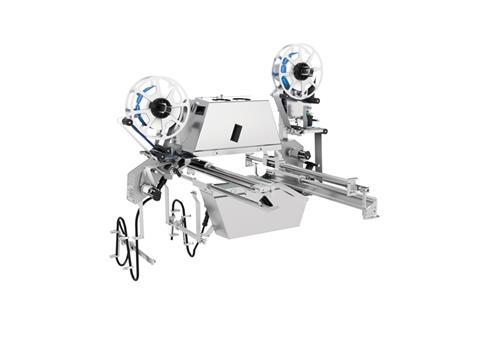 At FachPack 2019 MULTIVAC will be presenting a new generation of cross web labellers.

According to the company, in addition to improved performance and operating reliability, one of the features of the new models compared to the previous labelling solutions are their lower life cycle costs. The use of state-of-the-art communication standards such as IO-link and EtherCAT ensures that they are equipped for the future. This enables additional sensor systems for example to be used, such as those for labelling inspection or predictive maintenance.

The new cross web labellers are process-controlled. Individual movements are overlaid as much as possible, so that an optimised and therefore ‘significantly faster’ labelling process is achieved. Servo drives on all axes, as well as the virtually continuous operation of the longitudinal shift unit.

The new labellers have been fitted with the latest generation of label dispensers. MULTIVAC says the use of servo drives also offers the benefit that no reference runs have to be performed before the labelling operation is begun - and this means that set-up and conversion times are reduced, so that the labellers are operational more rapidly.

The company also says the robust construction of the new machine generation also makes a contribution to increasing the cycle output. The axis of the longitudinal shift unit is for example designed with even greater torsional rigidity than previously. The machines operate with significantly less vibration, and their travel range can be completed in a shorter time. The simplified construction with its fewer number of deflection rollers accelerates label roll change and makes it even easier, so that downtime is also reduced. In addition to these benefits, the more compact design also means a reduction in space requirement.”

The new machine generation from MULTIVAC also ‘sets the benchmark in the market for its ease of operation’. Menu guidance has been optimised and equipped with an integrated wizard function. The system only needs the required number of cycles to be entered - after that all the relevant speed and acceleration parameters are adjusted automatically. The Quick Control panel is also integrated in the labeller housing, so that the operator has less distance to cover.

Particular importance was attached to machine reliability, especially in view of the high cycle speeds. The constant monitoring of travel speeds and torque ensures that the highest level of process and operating reliability is achieved even at maximum output.

Thanks to targeted minimisation of potential faults, MULTIVAC says it has has increased the reliability and availability of the labelling system. The reduction in moving parts and an improvement in the cable feed also make a significant contribution.

Equipped for the future

According to MULTIVAC: “The new cross web labellers are already designed for the demands of tomorrow. State-of-the-art communication standards such as IO-link and EtherCAT enable the machines to be equipped with the latest sensor technology. Additional solutions for labelling inspection can also be easily retrofitted, since the corresponding interfaces are already integrated. And last but not least, the labellers are designed for predictive maintenance.”