K is for Plastics 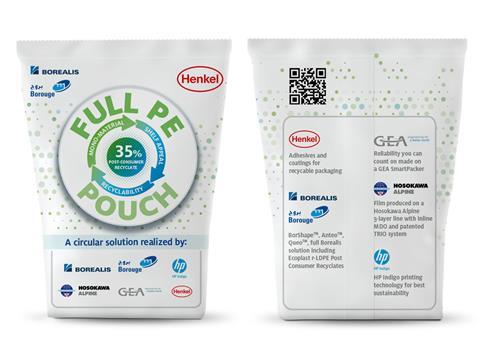 Düsseldorf’s giant K show is the world’s biggest plastics event, and its three-yearly cycle serves as a snapshot of how the industry is shifting. Tim Sykes visited K 2019 to pick out some key packaging trends and takeaways.

At K 2016 the design for recyclability conversation was very different. Initiatives that in today’s light might be dismissed as ‘downcycling’ commanding a lot of attention. Monopolymer strategies were still largely being discussed in theoretical tones. Fast forward three years and the range of mono-PE and -PP flexible packaging already on the market is truly impressive – with the properties of monomaterials extending all the time.

At this year’s K, solutions orientated toward enabling monomaterial packaging were on display across countless stands, beginning with the very top of the value chain. Dow is already offering a suite of high-performance PE-based polymers that contribute properties and production efficiencies in mono films that are comparable to existing multi-material packaging structures. ELITE™ resins, NUCREL™ copolymers, INNATE™ precision resins and AFFINITY™ sealants are all well established in the marketplace.

Meanwhile, Henkel introduced its new RE range of designed-for-recycling adhesives and coatings that aim to both improve recyclability of flexibles and facilitate use of PCR in new packaging. Solvent-free, the RE range is highly suitable for recycling and bonding of recycled plastic films. At the same time, they give excellent results at efficient machine speed, optimal ink compatibility for high-quality printing, high initial tack and room temperature curing. The adhesives are also claimed to improve the quality of recycling of materials in every step of the value chain.

K 2019 also saw the introduction of Milliken’s Millad® NX® 8000 clarifier that reduces weight and adds transparency to polypropylene. In addition to energy savings in the injection moulding process, the clarifier is envisaged as a driver of more easily recyclable monomaterial packaging, such as a 100% PP bottle + label + cap. Milliken’s additives will also be utilised in the scaling up of PureCycle’s processing of virgin-like recycled PP, using technology developed and licensed by P&G.

Collaboration has been a buzzword since well before the previous K but the evidence points to the fact that our industry has mastered the art of leveraging it. Messe Düsseldorf witnessed important updates from major pre-competitive initiatives such as CEFLEX and Sustainability Awards-winning HolyGrail, both of which will be familiar to Packaging Europe readers. There were many other instances of exciting partnerships that are delivering prototypes, bringing solutions to market, and pushing the boundaries.

Dow, for instance, displayed 30 recyclable packaging prototypes that were jointly developed with over 20 partners (from Kellogg’s to Kuhne Anlagenbau and Reckitt Benckiser to Reifenhäuser) via its Pack Studios network. Meanwhile, Henkel flagged collaborations with ExxonMobil to develop a full PE laminated stand-up pouch with 30 per cent recycled SUP content (including recycled adhesive) and another mono pouch with up to 35 per cent PCR resulting from work with Borealis.

An intriguing project was announced between DOMO, Covestro and Circularise to explore the potential to apply blockchain technology to the circular economy challenge. The founding idea is that achieving traceability and transparency in the supply chain, enabled by blockchain, will enhance transparency. The initiative intends to make it easier to choose traceable circular materials, creating incentives and providing critical information for reversed logistics and take-back of products and materials. This is an early-stage project, looking to attract new partners, and certainly a story to watch.

While design for (mechanical) recycling looks set to pluck a lot of low-hanging fruit in plastic packaging, there remain packaging applications and substrates for which this may not be a viable or appropriate model. Chemical (or feedstock) recycling represents a possible alternative, and a potential source of secondary raw materials that are suitable for food contact, and K 2019 reflected a significant step forward in both technology and capacity investments since the last edition. 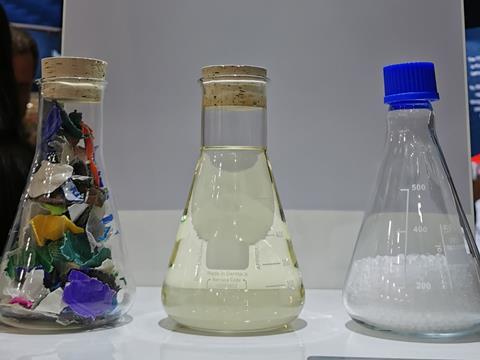 LyondellBasell announced a new pilot facility at its Ferrara, Italy site to further the development of its proprietary molecular recycling technology called MoReTec. This represents a step closer to potential commercial-scale applications. In collaboration with the Karlsruhe Institute of Technology, LyondellBasell has shown that use of a catalyst in the pyrolysis of plastic waste can reduce the temperatures and residence time required to break down the polymer chains into small molecules, making the process faster and more energy efficient, while improving feedstock quality.

Meanwhile, at K, Trinseo shared news of its groundbreaking polystyrene chemical recycling facility, due to be built in Europe to underpin a plan to offer 30 per cent recycled content to customers for PS packaging in Europe by 2025. In addition, Dow underlined its partnership with Netherlands-based Fuenix Ecogy to supply pyrolysis oil feedstock derived from plastic waste in order to produce new polymers at Dow’s Terneuzen facilities.

If brand owners are vigorously pursuing recyclability and increased PCR content, many are also hedging their bets by simultaneously investing in renewables. Capacity in biopolymers is rising internationally, along with tonnage in the packaging market.

This trend was reflected at K, with Mitsubishi Chemical Europe introducing the first certified home compostable coffee capsules (by Golden Compound), while FKuR promoted its Terralene® rPP compounds, which combine bio-based and recycled credentials. Borealis discussed its cooperation with Neste, which from the end of 2019 will see Borealis using Neste’s renewable propane as a feedstock for bio-based PP in which it will be possible to physically verify and measure renewable content.

Meanwhile, Dow announced that its partnership with UPM Biofuels is resulting in commercialisation of bio-based PE based on UPM BioVerno renewable naphtha. The naphtha is produced from crude tall oil, a residue of paper pulp production, meaning no extra land is dedicated for the feedstock production.