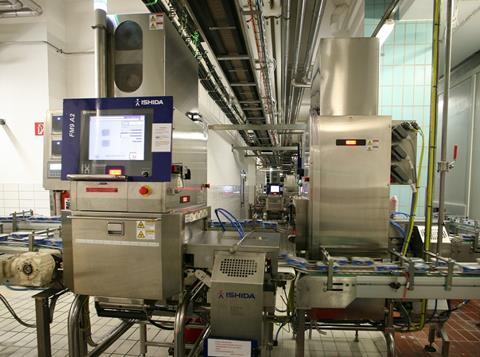 Two models from the Ishida X-ray range have been installed, the IX-GA-4075, which is inspecting plastic tubs with fill weights between 135g and 500g, and the IX-GA-65100, which is able to inspect crates packed with six and 12 individual packs “en bloc”.  As well as its soft cheese and quark specialities, the X-ray systems are inspecting plant-based products from Karwendel’s subsidiary NOA, dealing in total with 15 different pack formats.

Foreign body detection with metal detectors was not an option because of the metallised (aluminium) film lid and Karwendel also wanted to be able to detect non-metallic foreign bodies. This includes, for example, small stones in the herbs and spices formats and pieces of fruit cores that may accidentally end up in the soft cheese and quark formats.

The requirements profile demanded the reliable detection of specific foreign body particle sizes (for example, 1 mm stainless steel, 2 mm glass and 4 mm PTFE plastic). “Thanks to their relatively homogeneous mass, our products can be detected relatively easily by X-ray inspection systems,” reports Stefan Schindler, Head of Quality Management at Karwendel-Werke Huber. “However, high performance levels are required, as all of our production lines work at speeds of 172 cycles per lane (often using twin lanes) and per minute.” There are therefore only about three centimetres between the individual packs on the conveyors.

The selection of the Ishida X-ray systems followed careful assessment of various models by Karwendel. “The decisive factor for us was the ease of operation and the display’s practical user interface,” says Stefan Schindler.

For even easier and more space-saving integration on the production lines, the Ishida X-ray inspection systems feature cooling units fitted on top of the machines. The ultra-strong protective metal curtains at the inlet and outlet of the inspection chambers have been customised for each application. To reduce noise levels, the infeed and outfeed conveyors on some of the X-ray machines are fitted inside noise absorbing tunnels.

The Ishida X-rays are operating in a three-shift system.  On nearly all production lines, packs are running through the inspection chambers on twin lanes at a maximum belt speed of 40 metres per minute. Despite this challenging throughput, even very small foreign bodies are reliably detected. During the inspection of crates, completeness is also checked using a counting function.

The Ishida X-ray inspection system technology works regardless of the temperature, salt and water content of the product. It is also possible to test only defined product areas and to ignore specific parts of the packaging, such as the seal areas. The machines use patented software with a self-learning algorithm called Genetic Algorithm (GA). By analysing image data over a number of generations, it is possible to enhance inspection sensitivity by approximately 20% when using this function.

At Karwendel-Werke Huber, any packs that have been identified as faulty by the X-ray inspection system are isolated in a central collection bin using an air reject. These reject bins are sealed and can only be opened by authorised personnel. IX-GA-65100 X-ray inspection systems with extra-large inspection chambers use an arm reject to separate out-of-spec crates and guide them to a lockable collection table. Data logging records all optical and numerical information to allow seamless traceability.

The Ishida IX-GA X-ray inspection system is controlled by touchscreen on a Windows interface. A special monitor cover permits access to authorised employees only by means of an RFID chip. After an automatic set-up process, the machines are ready for use within 90 seconds, after which time further fine adjustments can be made. Product changeovers are implemented via the fast retrieval of up to 100 programmable pre-sets. Even cleaning is easy, thanks to the accessible stainless steel construction, and the conveyor belts are easy to remove and replace without the need for tools.

The X-ray inspection systems used by Karwendel-Werke Huber provide the required certainty that the inspected products are free from foreign bodies. The machines also collect a lot of valuable data at the end of the lines, and the dairy company wants to take advantage of this data soon. Therefore, the next joint project with Ishida will be the implementation of the IDCS (Ishida Data Capture System) software. This web-based program connects the X-ray inspection systems and records efficiency information such as downtime, performance and quality. The relevant data for each product and pack format can then be analysed in real time and displayed graphically, sorted by product batch, shift, operator, product, machine or line. The displays and reports are user-defined and can be individually adapted; the parameters can be accessed online at any time during operation, without interrupting production.

The IDCS II software is ideal for measuring Overall Equipment Efficiency (OEE) and offers an important business control function. Karwendel expects a direct increase in productivity as a result.