Henkel Announced as Winner of the 2017 RafCycle® Award 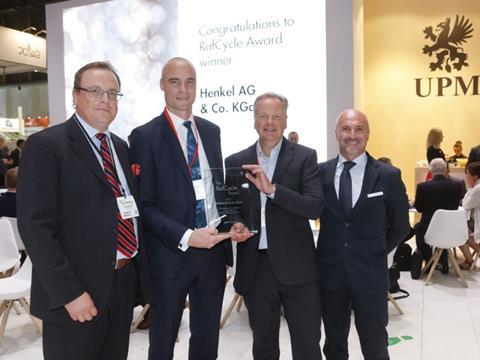 UPM Raflatac has announced Henkel as the winner of the RafCycle® Award at Labelexpo Europe 2017 in Brussels. The RafCycle Award is presented in recognition of excellence in recycling and environmental performance.

Henkel has demonstrated great commitment to improving the environmental performance of self-adhesive labeling and promoting the sustainability of the labeling business. Both Henkel and UPM share common values of driving sustainable business and the circular economy, including having the concrete target of zero waste to landfill.

"We're very proud to receive the RafCycle Award, as it recognizes our commitment to working with partners along the entire value chain to create sustainable value," says Jens Hainmueller, Head of International Packaging Development for Henkel's Beauty Care business unit. "Our partnership with UPM Raflatac gives label liners a second life, as they can be recycled to produce new paper materials. It's a great example of how we use our technologies and expertise to develop future-oriented solutions with partners who share our commitment to leadership in sustainability."

"Henkel has an important role in the labeling value chain, both as a raw material supplier and as a label end-user. This makes Henkel a special partner for us and the RafCycle program is a vital element of our cooperation," says Juha Virmavirta, Director, RafCycle solutions, UPM Raflatac. "We both see sustainability as a key for success and a driver of innovation. Our recycling partnership is a concrete example of this."

The RafCycle concept is giving new life to self-adhesive label waste that would otherwise be landfilled. In this latest success, UPM collects used label release liner from Henkel and recycles it into new graphic printing paper for books and magazines at the UPM Plattling paper mill in Germany. From Maribor this means roughly ten truckloads of material annually.

"Henkel has generated nearly 500 tons of siliconized glassine label liner waste at its Wassertrüdingen facility in Germany and Magyarorszag facility in Hungary. Henkel Maribor is now the third Henkel location to join the RafCycle concept. We are delighted that a major company like Henkel sees the value of our concept and that we are able to support Henkel in executing their sustainability strategy", says Virmavirta.