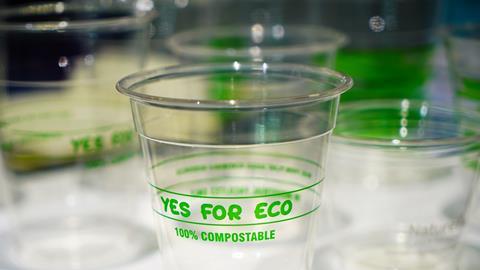 There are several newer classes of polymer that have the potential to challenge traditional fossil-based materials and reduce the carbon impact of plastic packaging. But commercializing these can be a process of many years and there are a number of barriers to overcome, as Victoria Hattersley discovers.

Today’s packaging market is, as we know, still largely dominated by polyesters like PET and polyolefins like PE and PP, which offer almost infinite recyclability, sterility and excellent barrier performance. Can these ever really be replaced with biobased materials?

Perhaps. There is an increasing awareness that polymers such as PET, PE and PP can all be made from biobased feedstocks to create what many would see as more ‘sustainable’ versions of these polymers (depending, of course, on what metrics you are measuring ‘sustainability’ by): PET, for example, can be made from sugar cane (Coca-Cola’s plant bottle is a famous example) and PP can be made from a number of waste oils. These are often known as ‘drop-ins’ as they have the same material structure and properties as conventional plastics.

“PET doesn’t care at the end of the day whether it is made from sugar cane or another biobased material but it has an inherently different carbon footprint depending on the monomer source,” says Scott Trenor, Principal Scientist at Milliken Chemical. “When it comes to package design and polymer choice, many different factors are at play. What does the package need to do? Does it need a good water barrier? CO2 barrier? Does it need to be flexible or rigid? The materials that are added to boost package performance, its shape, size and thickness will also determine how recyclable it can be at the end of life.”

The carbon question: Is biobased always the best option?

It might seem like a no-brainer: surely a biobased feedstock for polymers has to be better than using ever-more harmful fossil fuels. In many cases this would be correct, but it’s not always as simple as that and sometimes it pays to challenge our preconceptions. We need to consider the bigger picture, and that includes looking at the agricultural methods themselves.

“The issue is potentially less about the specific polymer type and rather about how it is made,” says Paul Davidson, Challenge Director - Smart Sustainable Plastics Packaging at UK Research and Innovation. “While deploying biomass as a feedstock uses atmospheric carbon rather than extracting fossil carbon, if modern agricultural methods lead to fossil carbon emissions (through energy, fertiliser, transport etc.) that are greater than the atmospheric carbon captured in the resulting material (compared to producing the same amount of material using fossil carbon feedstocks) then it doesn’t give you an overall lower carbon footprint.”

It’s a complex topic. A recent LCA methodology developed by the European Commission could even be said to tip the scales in favour of fossil-based plastics. However, according to Oliver Buchholz, Head of Communications at European Bioplastics, it neglects the ‘negative impact’ on the environment of the extraction of fossil resources and ignores the ‘key advantage’ of bio-based products – their ability to remove biogenic carbon from the atmosphere, sequester and store it into products.

“A highly questionable and scientifically controversial issue is given great importance in the LCA methodology: Indirect Land Use Change (iLUC),” says Oliver. “It’s based on mere model calculations that vary greatly due to the lack of standardized or harmonized guidelines. In order to have a fair methodology, there is an urgent need to include indirect effects of fossil-based plastics, and to also have a look at positive indirect impacts. Furthermore, the methodology compares mature and immature production systems without any differentiation. By not acknowledging these differences and potentials, the LCA methodology willingly supports the status-quo and stifles innovation.”

If true, this last point would certainly be a concern for the European bioplastics industry. Without continuous innovation it is hard to envisage a point where biobased polymers might come to dominate the market.

But the carbon emissions linked to processing and manufacturing biomass-derived materials do need to be factored in. Another point to be considered is the potential for technologies that can reduce the carbon impact of conventional fossil-based polymer manufacturing. A number of global companies are working on alternative polymer production technologies to the conventional fired cracking process. This could potentially allow for low CO2 polymers to be manufactured from fossil sources. These variables make carbon impact comparisons very challenging.”

And often, inevitably, it’s not about carbon so much as it is cost. “If we think about biobased monomer sources for traditional polymers, it’s more a cost and use discussion as to whether brands want to pay for biosourced materials,” says Scott Trenor. “At the current scale the biobased PPs and PETs are just more expensive and are not as widely available.”

The question of scale: the challenges of commercializing ‘newer’ polymers

Let’s move on from the well-established polymers to newer materials entering the market. It can be hard to pinpoint exactly what we mean when we talk about ‘new’ or ‘novel’ polymers. More prominent examples of these include polylactic acid (PLA), a biopolymer developed from renewable resources like corn starch or sugar cane; or polyhydroxyalkanoates (PHAs), which are polyesters synthesized using oils from the seeds of plants like canola or soy. But whichever material we are discussing, there are many challenges to overcome when it comes to commercialization.

“Moving from concept to market introduction is challenging for any new material, with many hurdles to overcome including scaling up production, the technology needed to process the material, and how the material performs and is managed through the supply chain and at end-of-life,” says Paul Davidson. “Substantial market interest and uptake in any new polymer is also important, as well as increased feedstock availability. Given the scale of demand for plastics, the market would prefer to have multiple sources for the same grade of polymer to ensure competitive pricing and supply resilience.”

“If we look at newer polymers like PLAs and PHAs, there’s a chicken and egg issue,” explains Scott Trenor. “Often the large brands can’t use them because they aren’t available at scale; but they won’t be available at scale until the demand is there.”

And again, there is also the ever-present issue of pricing… “From a market perspective, one of the key challenges for novel biopolymers certainly is the price,” says Oliver Buchholz. “However, this also applies for bioplastics in general. Still too often it’s the cheapest price that sells and this is usually the fossil-based option. The criticism against bioplastics as being too expensive provokes the counter-question of whether conventional fossil-based plastics aren’t just simply too cheap.”

Given such roadblocks, it is perhaps not surprising that the market share of bioplastics is still only around 1%. That being said, there are now several large brands trying to create the demand. Nestle waters and PepsiCo, for example, have made commitments to PHAs to grow the market size but it is always going to take time – often years or decades – to scale any process. Another company, Danimer Scientific, has also announced it will be investing in PHA scaling. On the PLA side, over the past few years we have been following the various industry collaborations with NatureWorks on its PLA bioplastics. In addition, at the end of last year Total Corbion announced the launch of Luminy, ‘the world’s first commercially available chemically recycled PLA’.

Another emerging material at the centre of much discussion in recent years is polyethylene furanoate (PEF). This is a biobased plastic made from fructose and biobased MEG which, it is claimed, offers higher barriers to carbon dioxide, water vapour and oxygen than even conventional plastics. As yet, this has not been introduced to the market but many are interested in its potential.

“During 2021, several announcements had been made that production capacities [for PEF] will be established,” says Oliver Buchholz. “Thus, we expect that by 2026 we will be able to see it produced at economic scale.”

There is also plenty of innovation going on in more ‘niche’ areas. Xampla, for example, have created a plant protein material that performs like synthetic polymers but decomposes naturally and fully. Home-compostable laminates are also slowly becoming more widely available.

Yet compostable plastics are still viewed by some with a certain about of scepticism. The issue here is twofold: first, whether compostables could ever offer sufficient mechanical properties to provide equal product protection to traditional plastics. The second challenge comes down to end of life: the majority of recycling systems still aren’t set up for compostables so if these kinds of materials end up in the recycling stream there are concerns about the possibility of contamination, or how well biodegradables perform in industrial composting.

According to Oliver Buchholz, any such concerns are misplaced: “There is a widespread lack of acceptance in the waste infrastructure, which in many cases is based on false prejudices regarding the performance of, for example, biodegradable plastic in industrial composting.”

It comes down to this: we have been using the same kinds of polymers for so long that all our infrastructure – sourcing, production and recycling – is built around and optimized for them. To break out of this market reality is certainly possible in the longer term but it means changing the entire value chain on a systemic level; perhaps even reducing our obsession with cost as the guiding principle. It also means tackling the problems of land availability and feedstock supply.

“I would advocate for a system-change approach that embraces reuse and refill as priorities, and also explores opportunities to decarbonize polymer production – regardless of the polymer type,” says Paul Davidson. “We also do need to ensure that any changes we make are cost competitive if plastics packaging is to be part of the just transition – particularly given its role in reducing the carbon impact of the products it is made to protect.”

And finally, we should reiterate that there is never a simple case of one material being ‘good’ and another ‘bad’. Fossil-based plastics will continue to have their place until biopolymers with similar protective properties can be developed on a wide scale. We should always bear in mind that the greatest concern to people and the environment is wasted resources. We are never going to reach a perfect situation in which we can say ‘Circularity achieved: let’s move on to the next thing’. Rather we should think of the task of reducing the carbon impact of plastics as a continuous balancing act, factoring in the impact of raw materials, production, constant review of recycling infrastructure and more besides. It’s a constant evolution, not a roadmap with a clear destination in sigh