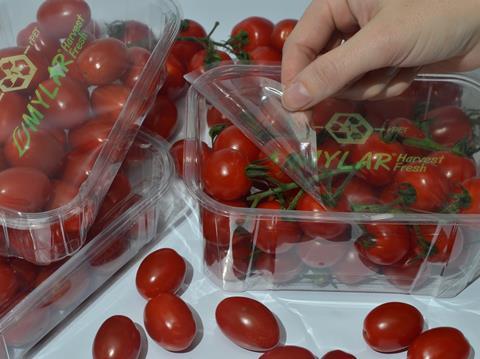 As the world's largest supplier of "top seal" polyester lidding films, DuPont Teijin Films combines the unique heat seal properties of the Mylar® Harvest Fresh range of films with base film made from food contact approved rPET polymer. The Mylar® Harvest Fresh range of films delivers the waste and cost reduction benefits of top seal lidding with the additional bonus of a lower carbon footprint product, giving retailers the ability to promote a clear and consistent sustainability message with post-consumer recycled content in both tray and lid.

Steven Davies comments, “There is no compromise whatsoever in terms of the heat seal performance with the added rPET polymer. It runs identically on our machines and in terms of mechanical and optical properties of the base film, the rPET polymer stays within our specifications. I would say there is negligible difference if any from virgin material to rPET.”

DuPont Teijin Films has worked closely with a world-leading supplier of rPET polymer, sourcing the raw material solely from one-way bottle deposit return schemes from Germany, Sweden, Norway, Finland and Denmark. The bottles are subjected to several stages of sorting and washing before going through the final patented URRC cleaning process. As well as proving a viable end use market for recycled polymer, the Mylar® Harvest Fresh rPET range also delivers a carbon footprint saving which has been estimated by third party audit to be approximately 1.4 kilograms less CO2 emissions for every kilogram of virgin material replaced by recycled content.

The Mylar® Harvest Fresh rPET range is available with the full range of DuPont Teijin Films' heat seal chemistries delivering all the benefits expected of Mylar® lidding films such as low temperature seals, class leading anti-fog performance and the ability to seal to a wide range of material including rPET and pulp punnets.

Steven Davies points to their own goals for PCR rPET content: “We are specifically working with our existing customer base to transition over to rPET. Offering the same performance and customer interaction- the rPET range also gives the added bonus of a positive message in terms of sustainability to the end users.”

DuPont Teijin Films will be exhibiting at the upcoming Fruit Logistica, Berlin, in February. Steven Davies concludes, “Our largest market segment for top-seal lidding is produce. We will be in discussions with retailers and converters at this exhibition to plan the next three to six months in terms of taking this solution to the market.”