Bread4PLA Programme Selected as one of Best LIFE Projects 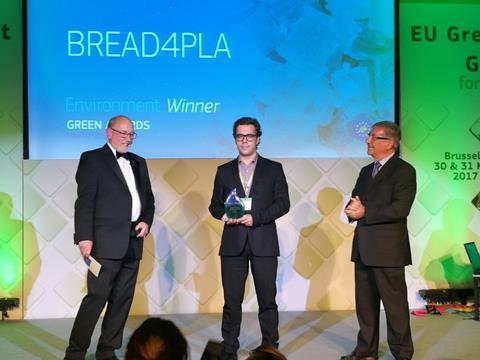 The project Bread4PLA, coordinated by AIMPLAS, has been awarded with one of the two Green Awards in the category of Environment that the European Commission has given as one of the best LIFE projects of the last 25 years.

Bread4PLA has resulted in new biodegradable and compostable packages for bakery and pastry products from wastes of the industryValencia (13-06-2017). – The project LIFE BREAD4PLA, coordinated by AIMPLAS, the Plastics Technology Centre, has been awarded with one of the two Green Awards given by the European Commission in the category of Environment after being selected as one of the best 15 LIFE projects of the last 25 years.

BREAD4PLA is a European project funded by the European Union LIFE+ programme whose objective is the treatment and recovery of wastes from bakery at pilot plant scale to result in new packages to be used in the same sector. Thanks to the fermentation of crusts and wastes from sliced bread and biscuits, polylactic acid (PLA) was obtained to elaborate film for new packages. This material contributes also to reduce the dependence on raw materials of fossil origin and is biodegradable, compostable and allows repackaging in sustainable bags and trays products of the industry.

The development had the collaboration of companies such as Panrico and Grupo Siro and is especially effective to avoid the rancidity of products like cookies, where a shelf life of up to twelve months has been achieved. Besides, it has allowed to offer a high added-value application to wastes that, hitherto, were used mostly as animal feed.

In the project, other researchers have taken part from the Cereals Technology Centre (CETECE) (Spain), the Leibniz-Institut für Agrartechnik Pstdam-Bornim ATB (Germany) and the Biocomposites Centre of the Bangor University (UK).