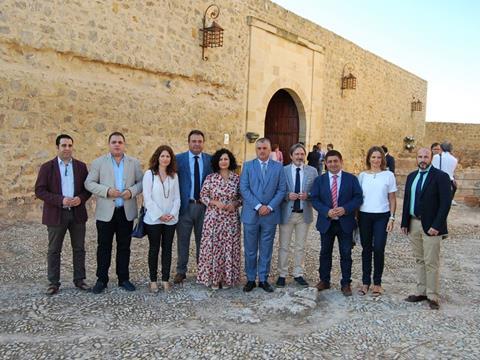 The Plastic Cluster has been officially presented, counting with the presence of the regional minister of the Andalusian Department for Labour, Business and Trade, Javier Carnero.

More than 40 companies from all over Andalusia have taken part in the foundation session for the Andalusian Plastic Cluster, organized by the Technological Centre for Plastics (Andaltec) in the castle of Alcaudete (Jaén). This Cluster will allow for the creation of the first network of private companies and public organisations working together in order to develop new polymeric materials and plastic transformation schemes. Public institutions, plastic industry companies and Andaltec will work side by side in order to generate quality jobs and sustainable wealth for the region. Andaltec will be leading this project, as the European Cluster Collaboration Platform has already registered this Technological Centre for Plastics within the Plastic Cluster for Southern Spain

The Plastic Cluster is born with strong institutional support, as this session has been honored with the presence of important officials such as Javier Carnero, regional minister of the Andalusian Department for Labour, Business and Trade; Francisco Reyes, president of Jaén’s Provincial government and Francisco Buenaño, president of Andaltec Foundation. The mayors from Alcaudete, Valeriano Martín, Martos, Víctor Torres, and Alcalá la Real, Carlos Hinojosa, have also attended this important meeting, as well as Ana Cobo, main representative of the Andalusian Government in Jaén; Mº Paz del Moral, provincial head of the Andalusian Labour department or Mauel Hueso, head of the Labour department in the Provincial government.

During his speech, Mr. Carnero has announced that his department is close to pass the new Cluster Strategy for Andalusia 2017-2020.He stated that “this initiative is intended to foster the presence of these business clusters and achieve that they are not only smart companies for the development of competitive capabilities but also powerful structures which are perfectly aligned with the general interest of industrial policies”.

The regional minister also highlighted the importance and strength of this industry, counting with more than 420 companies in Andalusia. They are specially concentrated in the province of Jaén, where multiple companies working in the automotive, agriculture, packaging sectors can be found.

The Andalusian Plastic Cluster has been created in order to generate sustainable jobs and wealth for companies in the plastic industry through an increase in the competitiveness of Andalusian companies, as it was stated by the president of Andaltec Foundation, Francisco Buenaño. He also added that this initiative will allow the revitalisation and internationalisation of small and medium companies working in the plastic industry. He asserted that “new business opportunities will also arise for companies, as well as new networks for markets, products and services. All of this will be possible thanks to an increase in their R&D activity for all the companies taking part in this Cluster”.

The president of the Provincial government, Francisco Reyes, has also reminded the enormous importance of the plastic industry in the province’s economy. He declared that “Jaén contributes with 25% of all companies within this sector in Andalusia, which generates more than 10,000 direct and indirect jobs”. He also stated that the Provincial government will continue supporting and helping them in the future.