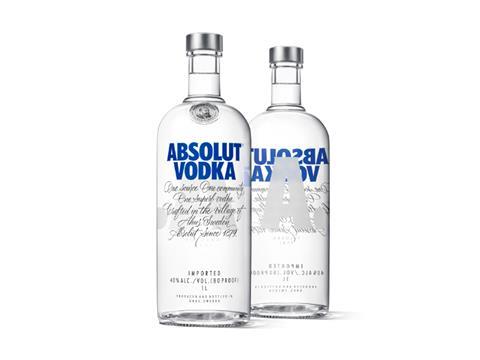 Pernot Ricard-owned spirits brand Absolut Vodka has unveiled its biggest packaging refresh since its launch, in a bid to highlight its historical credentials.

Influenced by the community surrounding its production and distillation in and around Åhus, Sweden, the new bottle includes changes that nod to the craftmanship behind the vodka.

These design updates include bringing to life Absolut Vodka's 'One Source' philosophy by including text alongside an illustration of the original distillery noting 'ONE SOURCE. ONE COMMUNITY. ONE SMALL VILLAGE IN THE SOUTH OF SWEDEN', reinforcing the fact that every bottle of Absolut Vodka is produced and distilled in and around Åhus, Sweden.

In addition, the inclusion of the address of the original distillery on the front label seeks to provide transparency about the location and help communicate Absolut's brand home. This is the first time Absolut has included a paper label on the bottle.

The company has also enhanced the legibility of the script, which it hopes will allow more people to read and enjoy Absolut Vodka's story.

By adding brand founder Lars Olsson Smith's name on the medallion, the quality seal of the bottle, the company hopes to pay tribute to his progressiveness in vodka distillation.

Lastly, embossing the glass with 'COUNTRY OF SWEDEN' links back to its long-standing tradition and knowledge of vodka making in this region.

Speaking about the brand's new bottle design, Charl Bassil, global vice president for marketing at Absolut, said: "Our new look reflects the efforts we put into the making of our vodka. We've taken a look at ourselves and have landed in a place where we've kept our distinct DNA, communicating our provenance, heritage and authenticity more clearly than ever before.”

Elin Furelid, global head of product portfolio and design at Absolut, adds: “We were keen to capture our rich, quality story and make that clearer on the bottle, signposting to what makes our vodka unique. We have of course kept the most important design elements that makes Absolut, Absolut.”

The new design Absolut Vodka bottles will be available in the USA from September 2021 onwards and continue to roll-out globally depending on current stock inventories.