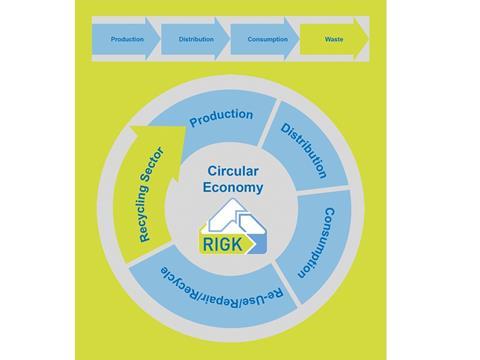 25 years ago, in January 1993, RIGK opened its doors for business. There are good grounds for everyone to celebrate this anniversary as RIGK has been promoting the concept of a circular economy with increasing success ever since. As a middleman between distributors and end users, it helps to ensure that used plastics packaging and agricultural plastics products once again become valuable raw materials. With 28 staff at its Wiesbaden headquarters and 60 staff worldwide, RIGK is operating eight recovery systems in this anniversary year, trading in plastics and providing worldwide project-based consultancy. RIGK works together with some 58,000 customers and over 1,100 suppliers and partners across Germany. RIGK also has a presence in Romania and Chile with subsidiaries which operate recovery systems or implement recycling systems and carry out consultancy projects.

Customer focus, careful management of resources and the promotion of innovative approaches to recycling have been the hallmark of RIGK right from the outset, an approach which has borne fruit not least in terms of permanently low licence fees for its customers.

Turning away from a throwaway society towards product stewardship

RIGK was founded twenty five years ago following the entry into force in 1991 of the German packaging regulations applicable to all packaging distributors. With an initial staff of two, RIGK has from the outset had the aim of encouraging a move away from a throwaway society towards product stewardship beyond the private domestic sphere. The emphasis, in addition to avoiding plastics packaging waste, was on establishing a private sector system for collecting and using such waste.

In fact, customers quickly flooded in, as did cooperation partners in the form of large- and medium-sized businesses, above all from the plastics and the raw materials production sectors in order to put the declared aim of Responsible Care into practice.

Internationalisation – key to the future

Over and above recovery systems and plastics trading, international consultancy is today a significant part in the RIGK's range of services. Consultancy includes project-based activities in Canada and Russia together with subsidiaries founded in Romania and Chile which are assisting with setting up recycling systems both locally and in neighbouring countries.

An increasing focus on international and cross-sectoral issues in the circular economy is reflected by RIGK's membership of organisations such as BiPv, the German industry initiative on product stewardship, and EPRO (European Plastics Recycling Organisation). Such efforts also include the International Recycling Forum which RIGK jointly organised with EPRO in Wiesbaden for the second time in 2017. With its focus on recycling agricultural plastics and current political issues around plastics recycling, the Forum is making a valuable contribution to cooperation in the development of solutions for handling plastics waste and implementing associated European and international regulatory and legislative texts. A third Recycling Forum, again in Wiesbaden, is scheduled for November 2019.

Striving for perfection hand in hand with industry, business and associations

As RIGK's Managing Director Markus Dambeck explains: "Germany today has a range of highly effective recovery systems which are tailored to end user requirements. As a result, it is achieving recovery and recycling rates which are very close to the EU's ambitious requirements and we have made our individual contribution as a common interest group of the plastics and packaging materials manufacturing industry. In the light of increasing demand for packaging from a growing global population, the finite nature of many raw materials and the typical persistence of plastics waste, the challenges facing the circular economy set out over 25 years ago remain as current as ever. Moreover, the current EU waste package with its ambitious plastics recycling rate of 55% by 2030 and the EU Plastics Strategy will require a further intensification of the existing, responsible collection and recycling activities.

RIGK will strive to perfect existing systems and develop new, yet more efficient ones. We see ourselves as an active player constantly facilitating an unbureaucratic dialogue between associations, businesses and manufacturers with the aim of improving recovery and recycling systems. Our work also includes defining usage-based licence fees and the associated evaluation of the recyclability of packaging materials and package contents as well as ongoing optimisation of return processes for everyone concerned."

As a certified specialist company for trademark users (fillers, distributors, traders and importers), RIGK GmbH, founded in 1992, organises the recovery of used, empty packaging and plastics from its German customers and arranges the safe and sustainable recycling of them. In addition, the company provides advice on the development of individual recovery and recycling solutions. On an international level, RIGK is represented in Romania and Chile. The Romanian subsidiary also undertakes the recovery and recycling of used packaging and plastics there. RIGK Chile SpA advises local industry in establishing their systems and complying with legal environmental and recycling constraints. The shareholders of RIGK GmbH are well-known manufacturers of plastics and packaging.

RIGK GmbH has been a member of EPRO since 2006, where it established the working group for the recycling of agricultural plastics waste.