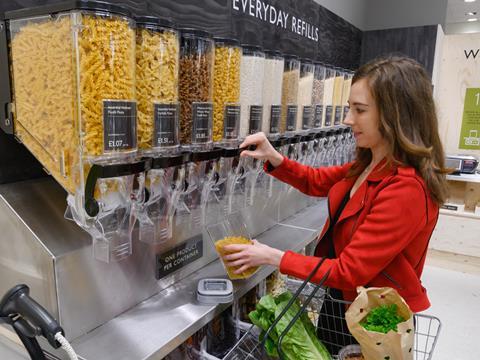 In response to growing customer demand for refillables, retailer Waitrose has announced that it is launching more new products as part of its ‘Unpacked’ refillable concept, including loose tea for the first time.

Sales of refillables at the retailer’s four ‘Unpacked’ shops have grown by nearly 9% in the past six months, with a number of products proving particularly popular with shoppers.

In particular, sales of refillable frozen fruit and vegetables for the same period have increased by more than 50%, detergent and washing-up liquid sales have grown by 24% and pulses, pasta and grains have risen by almost 8%.

In January, Waitrose began to integrate unpacked items into its regular aisles within its shop in Wallingford, Oxfordshire, rather than having a single unpacked area. The test aims to understand whether customers would be more likely to shop 'unpacked' by incorporating it into their normal routine shopping trips, rather than visiting a separate part of the shop.

The move has helped sales of refillables at the shop increase by more than 20% in the ten weeks of the test to date.

The 13 new products launching today build on the new lines Waitrose added at the end of last year and there are plans for more to be added later this year.

The new lines, which have been selected following customer requests in categories where Waitrose has seen strong growth, will be available from this week and will all be cheaper than their packaged equivalent to encourage more people to make the switch to refillables.

Marija Rompani, partner and director of ethics and sustainability at Waitrose, said: “We are really beginning to find some momentum with customers demonstrating that this is how they might be prepared to shop with us in the future and we are especially encouraged by the response to moving the concept in-aisle to make it more of the norm when visiting us. We know there is much more work to do, but the reaction of customers right now is giving us the confidence to continue moving forward with Unpacked.”