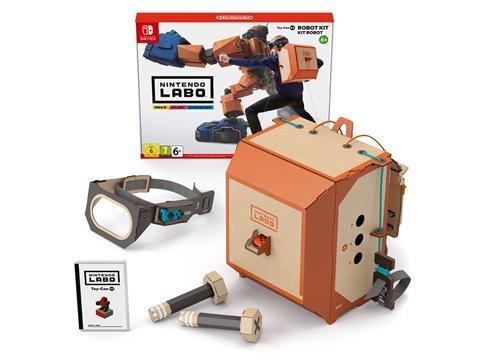 Nintendo Labo was this year’s game changer from Japanese console and video game maker Nintendo. It turns modular components made of corrugated cardboard into interactive gaming controllers that link directly with the Nintendo Switch TV console. As the European supplier for Nintendo Labo, Thimm is producing the technically challenging corrugated cardboard sheets at three of its German production plants.

Nintendo Labo encourages gamers to build, play and discover: No tools are needed to craft the pre-cut corrugated cardboard sheets into shapes such as a piano, fishing rod or motorcycle handlebars. This so-called Toy-Con can be linked into the Nintendo Switch video game console — bringing them to life. Players can then make music on the piano, catch digital fish with the rod or go to the limits racing motorcycles. Because the controllers are made of corrugated cardboard, they encourage creative shapes and designs. Imagination is given space to run wild.

The corrugated cardboard is given a completely new role here. It no longer serves in its normal function as packaging, but rather as a fundamental component of the final product. “The construction and setup of the Toy-Con must work flawlessly to ensure that the fun runs smoothly,” explains Benjamin Brulic, the Account Manager at Thimm Verpackung who implemented the project with his team. “That sets a high bar for the production team to meet. We made sure we could clear it by undertaking an intensive implementation phase in coordination with Nintendo and by putting ongoing quality controls and a highly trained production staff into place.” The Nintendo Labo corrugated cardboard sheets, produced from a special type of corrugated cardboard created just for this customer, are delivered flat die-cut and in one or two colours.

“Nintendo Labo combines the fun of video gaming and handicrafts and opens up entirely new possibilities for how you can use our sustainable corrugated cardboard packing materials. As Nintendo's European supplier, we at Thimm are thrilled to be part of this unique and creative product,” says Michael Weber, Director Corporate Marketing for the Thimm Group.