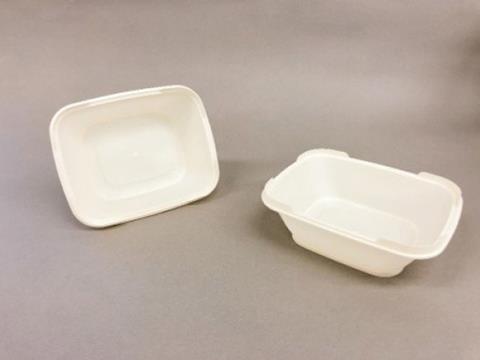 Using supercritical fluid and its original moulding technology, Toppan Printing has developed an ultra-thin-walled container that it says is roughly 30% thinner than conventional injection moulded containers.

The reduction of plastic resin usage for injection moulded containers requires the minimum possible thickness when moulding – an issue that has in the past presented challenges in terms of cost, durability, and the feasibility of mass production.

According to Toppan, thermoforming has generally been considered better for producing containers that need thin walls, but it does not offer the same scope of possibilities for design as injection moulding.

With its new solution, Toppan claims to have exceeded the conventional limit of injection moulding and form products with a reduced thickness close to that achieved by thermoforming. Supercritical fluid is dissolved in molten resin to ensure that it efficiently reaches every corner of the injection mould. This reportedly results in lighter containers with thinner walls, while maintaining freedom for shape and design.

The company says that the wall thickness of injection moulded items can be reduced by approximately 30%, from 0.5 mm to 0.35 mm – making it possible to reduce plastic consumption by up to 30% and also helping to lower CO2 emissions associated with resin manufacture. In the case of a prototype margarine tub, Toppan reports that CO2 emissions during manufacturing decreased by about 20%.

As the fluidity of the resin injected into the mould is improved, the technology also apparently enables the use of different plastics, such as biodegradable resin and biomass polyethylene, which have previously been difficult to mould.

Despite the reduction in thickness, strength is reportedly maintained, as is the scope to design containers in a wide range of shapes matched to their use.

“This new technology enables the production of containers that offer all the benefits of conventional injection moulding but with reduced impact on the environment,” said Toshiaki Kakemura, general manager of plastic development for Toppan’s Packaging Solutions business.

“We will expand sales to manufacturers of food and toiletries and continue to drive sustainable solutions for society and growth for our customers’ business through the TOPPAN S-VALUE Packaging range.”