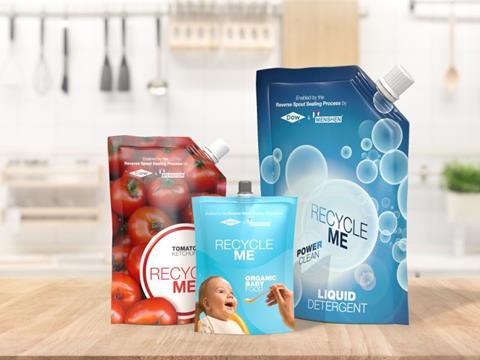 Torsten Sauer, project manager sustainability at Robert Bosch Packaging Technology GmbH has also observed an increasing use of monomaterial packaging due to the ongoing drive towards a circular economy, and with it an emerging trend for films made from polymer monomaterials.

“Conventional multi-layer composite films are difficult to recycle because of the need to separate the different film layers. What’s more, many countries do not have the necessary recycling systems and processes in place to recycle complex laminates. In contrast, monomaterial films are fully recyclable as all layers are made of the same type of plastic, which makes sorting easier and leads to cleaner recycling streams. Bars, cookies and crackers for example are usually wrapped using polypropylene (PP), which is often a sufficient barrier. Depending on the packaging application, this can be either CPP (cast polypropylene) or OPP (oriented polypropylene).

From a machinery point of view, the transition from composites to monomaterial films can be complex, as he explains, most importantly as monomaterials impose high demands on the sealing technology, especially in the high-output range.

“Heat sealing is still the most used technology, due to its robustness and good sealing results. The sealing window is much smaller for monomaterials, which means the parameters sealing time and temperature have to be aligned precisely to prevent damage to the heat-sensitive outer layer while ensuring the sealing integrity of the inner layer. With heat-resistant composites this is unproblematic; but in the case of heat-sensitive monomaterials this can easily lead to defective seals and damaged products, resulting in lower production efficiency.”

He points out that this must be addressed by optimally coordinating the three sealing parameters of pressure, temperature and time to create the perfect seam using monomaterial films at different film speeds and constant energy input.“What’s more, these technical challenges have to be mastered for a range of different monomaterials. This can only be achieved through the continuous improvement of sealing technologies in order to adjust the fin and cross-sealing tools to the new conditions. In addition, a change in stiffness and elasticity of the material can influence the performance on the packaging machine, for example when film speeds vary during production.

Bosch Packaging Technology has been testing a wide variety of packaging materials with customers and cooperation partners at its technical centre in Beringen, Switzerland with the goal to optimise its systems and sealing technologies to meet the specific requirements of the different materials. The overall aim is to achieve greater sustainability without compromising product protection, seal integrity and packaging speed. Flow wraps have established themselves as popular packaging for a wide range of products.

“With monomaterials, the biggest challenge is the sealing of the films at high speeds. Here we are already achieving good results in tests on our horizontal flow wrapping machines,” concludes Mr Sauer.