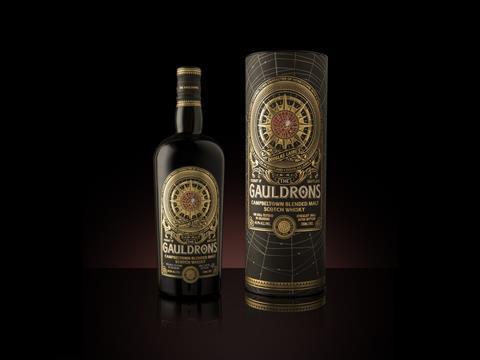 A newly released special edition whisky called ‘The Gauldrons’, a ‘vatted’ malt whisky exclusively produced in very small batches by distiller Douglas Laing & Co, has been launched in time for Halloween featuring a dark and mysterious label produced by The Label Makers.

Inspired by ancient folklore, the label features an intricate spider’s web illustration, which takes its cue from King Robert the Bruce and the famous spider story.

The initial brief was to create a dark, eerie Halloween design, where the detail of the foiling was key to the overall look and feel of the label. Super white opaque material was chosen to provide a hand-crafted finish. The brilliant white of the material meant that a dense black could be used, which allowed the ‘Gauldrons’ namestyle to hold up well against the foil. The thickness of the white material also allowed for a better emboss, providing a more premium look. The end result is a rich dark label, which emphasises the central web area due to the complex foiling surrounding it.

Cara Laing, Douglas Laing & Co’s director of whisky and the third generation of the Laing family to be involved in the company, said: “We named The Gauldrons Campbeltown Malt Scotch Whisky after the eponymous dark sandy coves on Campbeltown's west shores. It literally means ‘bay of storms’ and the brief to our talented, long-term design partners was to create a pack that told the story of our Whisky in an eye-catching, premium and moody way.

“We’re thrilled with the final result, and feedback from our global customers has been overwhelmingly positive, particularly around the intricacies The Label Makers have achieved with the foil detail, and the overall depth of colour. The project was not without its challenges, such as ensuring the sharpness of foil and matching the colours of the label to those of the gift tube, and the flexibility, willingness and sheer determination from The Label Makers team ensured that the resulting packaging is nothing short of spectacular.”

The Gauldrons is available now from specialist retailers, in a black bottle and gold foiled presentation tube.

The Label Makers will be showcasing their unique premium labels at the Packaging News Live Spirits Summit Edinburgh on Thursday 16 November, on Stand 9.