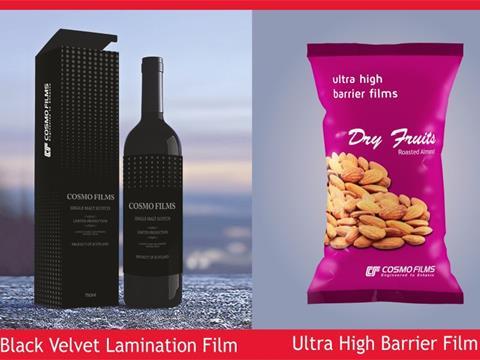 Cosmo Films, a global leader in films for packaging, labeling and lamination applications was recently announced as one of the winners for SIES SOP and IFCA Star Awards for excellence in its packaging innovation and product development in the flexibles space.

The winning entries for SIES SOP Star Awards include a recyclable soap wrap film and an Ultra High Barrier Film that can serve as a replacement of aluminium foil. The recyclable soap wrap film is a major innovation as it helps both brands and converters fair better on laminate structure rationalization & GSM reduction thus reducing the overall costs; better aesthetics because of pearl effect and of course recyclability quotient. The winning entry for IFCA star award includes a Black Velvet Lamination film which offers intense black colour along with velvet touch to the laminated paper/paperboard or package, thereby enhancing its overall aesthetics.

IFCA Star Awards are conferred by the Indian Flexible Packaging & Folding Cartons Association, SIES SCHOOL OF PACKAGING STAR AWARDS as the name suggests are presented by the renowned institution SIES that is credited with producing some of the finest professionals of the packaging industry. The awards presentation ceremonies for both the awards are yet to take place (scheduled for November); however, the winners have already been announced.

Expressing delight over the latest award announcements, Mr Tapas Mandal, Head-Research & Development at Cosmo Films said, “We are humbled to receive these awards. Any form of recognition encourages us to only raise our product standards to the next level. These awards go on to further assure our customers that we have been developing some of the finest products with improved functionalities & aesthetics with cost effectiveness in mind.”