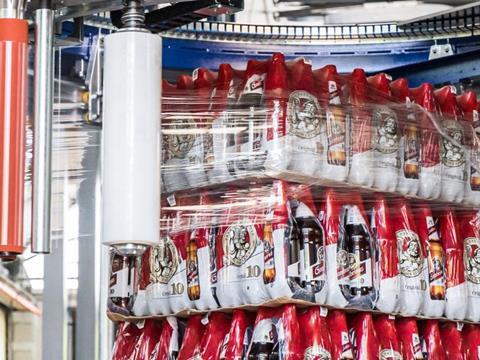 Robopac will be pre-empting the future when it showcases Genesis Thunder – the new high-speed, automatic wrapping machine featuring a rotating ring – at drinktec 2017 (Munich, 11 to 15th September).

Continuing its mission to renew and optimise all its machine models, the family-run company is launching a new generation of high-performance ring machines for wrapping and stabilising loads on pallets using stretch film employing Cube Technology™, the state-of-the-art solution adopted by Robopac for its top-end products.

Robopac's Cube Technology™ ensures the right amount of film is provided in the most effective position, applying also the right force to ensure the product is properly secured; this triple combination means consumable costs are appreciably reduced, quality wrapping improves significantly, and damage to palletised loads during transport lessens.

Robopac goes green: the obvious advantages offered for the environment include not only less use of materials and therefore a lower impact on the environment, but also fewer products damaged during handling and transportation (due to perfect load stabilisation), which means fewer goods are rejected and returned to the sender by the large-scale retailers or individual customers, reducing activities which involve considerable costs on both a financial and environmental level.

Genesis Thunder originates from development activities focussing on Robopac's earlier high-performance ring wrapping machines and it maintains some of their more unique features. For example, it features no sliding electrical contacts, which means it is suitable for all industrial environments (even those exposed to high levels of dust and powder) and also guarantees safety and less machine downtime. Robopac has been working on the design and patents for this technological solution since the mid-1990s, as its success in the world's markets has led to continuous upgrades over time.

Take, for instance, the power supply system for the motorised pre-stretch units, which initially exploited the dynamo principle and then went on to introduce the patented supercapacitor system, based on the KERS (kinetic energy recovery system) used in Formula 1 cars; this super battery recovers energy during use, then injects this power back into the circuit, making the machine completely independent. During braking or when the units are idling, the motor charges up the battery to provide the power needed when the machine is running.

The Robopac evolution is never-ending. The goal is to leap into the future, to forecast what all our partners will be needing in the coming years so that we will be able to supply machines that offer ever-better performance, combined with increased reliability and safety. With this would come palletised products with greater stability for end customers, in line with the expectations and needs of industrial production and logistics plants, of both today and tomorrow.

In addition to curbing use of packaging material, Genesis Thunder also considerably cuts down the Total Cost of Ownership (TCO), mainly due to the high quality, low-wear components featured, such as more efficient motors and the use of toothed belts instead of chains, which offer a long, maintenance-free working life. This obviously lengthens the intervals (in terms of operating time) before work is needed on the machine and means that parts are replaced according to a reliable schedule.

Improved machine accessibility means maintenance is much easier. Ergonomics is another aspect on which the company has focussed noticeably. Serviceable parts are within the operator's reach as they can be accessed without using platforms or lifting equipment. Total ergonomics also means avoiding having personnel working in high (and therefore potentially dangerous) positions - in keeping with the Robopac philosophy of Safety First.

In terms of construction, the ring is supported by four legs and the centre of gravity is aligned with respect to the lift axis, providing the Genesis Thunder with a simplified, balanced power distribution system, which means the structure is subject to less stress and less wear.

With the same rpm rate, the excellent structural balance guaranteed by the specific design, together with the innovative construction materials used, have led to further improvements in cycle times and therefore a greater production capacity, which is higher than any other machine currently available on the market.

In line with hygienic design principles, the machine is specially devised to cut down build-ups of the dust and dirt usually found in industrial settings. While indisputably an indispensable advantage for companies operating in the food or pharmaceuticals industries, it is also a much sought-after feature which is appreciated by all modern companies. Furthermore, following on from the earlier Helix EVO models, Genesis Thunder is also designed for the application of the TPM philosophy, envisaging simplified and preventive maintenance, which is nowadays commonplace in all industrial environments where the line staff are minimal.

The Genesis Thunder presented at drinktec 2017 will also feature the ARC automatic reel changer system, a patented motorised unit which changes the wrapping reel automatically, without the operator's intervention, expelling the empty cardboard core and positioning the new reel; it will also feature the Roping Device, which is designed to reduce the strip of film to a sort of rope, making it stronger and more elastic at the same time, and allows more effective load stabilisation; last of all, the system will include the innovative Nip/Tuck Tail System for seamless end-of-cycle sealing. This low-maintenance system, featuring no smoke emission, guarantees a perfect finish at the end of the wrapping cycle, which will stand up to any automatic storage system.