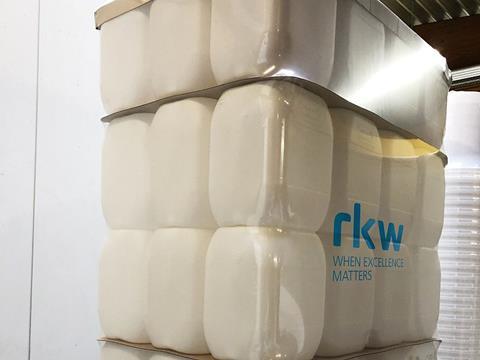 RKW has developed a stretchable shrink film which according to the company reduces energy consumption as it shrinks much faster than conventional films. It also cuts material requirements by more than ten per cent.

Shrink films are used to secure pallets during transport and protect them against contamination and weathering influences. These films owe their name to their main characteristic: after heating and the subsequent cooling down, they shrink and tightly adapt themselves to the shape of the palletized goods.

Conventional shrink films are cut to larger dimensions than the product to be packaged. Depending on the pallet and packaging system, this difference can amount to as much as eight per cent. Consequently, the shrinking process consumes a significant amount of energy. In addition, the use of oversized film often causes wrinkles on the secondary packaging, increasing the risk of holes in the primary packaging.

The RKW innovation turns the stretching and shrinking process upside down: "Our goal was to develop a sustainable shrink film that is smaller than the pallet dimensions but can be stretched and pulled over the palletized goods," explains Dimitri Rudsinski, Head of Sales Industrial Packaging at RKW Nordhorn. Even before the shrinking process, the film adapts perfectly to the pallet shape. The result: optically flawless pallets, free from wrinkles or holes. It also offers customers advantages in terms of sustainability and process efficiency. "The film dimensions per pallet are significantly smaller, which helps users to eliminate unnecessary excess film. This accounts for a savings potential of ten percent or more," Rudsinski explains.

The new film shrinks up to 75 per cent quicker than conventional films. This reduces energy consumption and costs. More efficient shrinking processes also shorten cycle times and maximize output. The film is ideal for odd-shaped products that are difficult to package using shrink film, such as hybrid packaging systems.