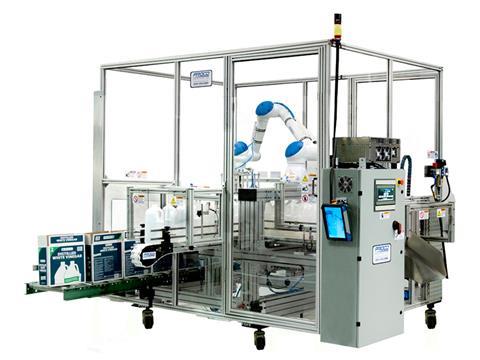 Proco Machinery Inc., a manufacturer of automation systems for the blow moulding industry, has unveiled the next generation of its Pakman case packer.

The solution is integrated with Yaskawa Motomon HC10 and HC20 collaborative robots and claims to provide greater efficiency and automation for blow moulded bottle manufacturing lines.

“These systems are being designed in such a way that they complement the production line and provide simplified operation, a smaller footprint, and enhanced efficiencies,” said Siva Krish, vice president of sales for Proco Machinery. “These collaborative robotic systems reduce the handling of the container and provide an excellent return on investment (ROI).”

Proco’s Pakman case packer features a collating indexing accumulation system to accumulate complete layers of bottles inside the packaging cell. The accumulation table stages the layer of bottles so they can be picked up by Proco’s end-of-arm (EOA) tooling and placed inside the box.

According to the company, this feature helps to increase the line speed of the Pakman packaging cell since there will be one movement of the robot per layer.

PET containers - due to the high static levels in heated bottles - tend to repel each other when they are close together. The layer pack EOAT technology reportedly ensures that containers are placed inside the box as a complete layer, preventing any change of bottle position.

Another feature is Proco’s Integrated Rotary Inverting Technology, which helps to rotate a layer of bottles to neck-down orientation. This feature does not change the packaging cell size, and is an add-on feature that can be purchased at a later date and fitted to the line.

The Proco Pakman case packer is a totally integrated packaging module and is supplied with a six-axis collaborative robotic arm, infeed conveyor, and a box conveyor all mounted onto a common sub-frame which in turn is fitted with leveling pads and castor wheels.