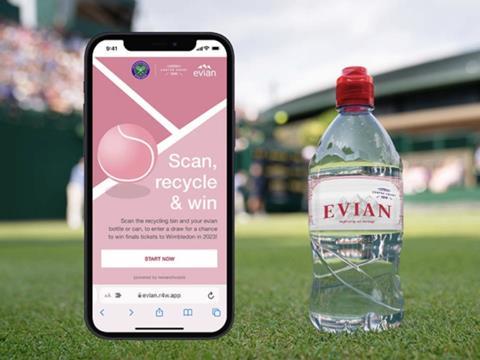 At this year’s Wimbledon tennis tournament Evian is partnering with Reward4Waste on a project that incentivises recycling via a novel consumer reward scheme.

This initiative is the start of Reward4Waste’s longer-term relationship with Evian to explore how Digital DRS can enhance the Deposit Return Scheme planned to be introduced in Scotland in 2023 and England, Wales and Northern Ireland in 2024.

At Wimbledon, visitors will be invited to take part in the project, named ‘Return4Reward’. By scanning the unique QR code on the recycling points and scanning the barcode on Evian drinks containers and recycling, users have the opportunity to enter a draw to win two pairs of tickets to the Wimbledon 2023 Women’s Finals.

Return points can be found across the Grounds and in the Wimbledon town centre.

In a bid to be in keeping with the event, a hawk-eye animation will then be shown within the app with the sound of a racket shot. To show the recycling has been registered, an ‘IN’ tick, similar to a successful line challenge, will then appear on the phone screen. The animation ends by telling the user ‘You’re in the draw’.

Evian hopes that this innovative user experience will allow it to gain an understanding of whether an engaging digital platform can help to encourage consumers to recycle.

This scheme aims to support Evian’s long-term commitment to becoming what it refers to as a “100% circular brand” by 2025. Other projects that fit in with this ambition include the company’s bottles made from 100% rPET, and the Evian 5L (re)new water dispenser, which reportedly lowers the use of plastics by 60% versus a single-use bottle.

“We are incredibly proud to be partnering with one of the world’s largest drinks brands at such an iconic sporting event this Summer. Our Reward4Waste technology has proven itself in previous projects to engage citizens, and we look forward to seeing it in action at The Championships, Wimbledon,” says Tony McGurk, chairman at Reward4Waste.