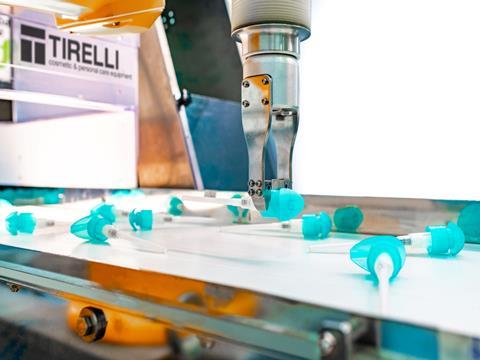 AROL GROUP’s TIRELLI ROBOSORTER is aimed at increasing the flexibility of low-speed feeding systems for triggers and pumps used in healthcare applications.

The new solution from AROL GROUP uses a robot equipped with a dedicated tool that allows triggers or pumps to be loaded from the elevator tank, with the lift then carrying them upwards after dropping them by gravity onto a horizontal motorised belt.

AROL GROUP says that on the horizontal picking tape, the triggers or pumps pass under the 2D vision system, which is responsible for recognising their position and orientation. The robot then reportedly takes them from the tape using a compliant specifical gripper and unloads them inside an orientation guide, while the triggers or pumps not taken are returned to the lift to restart the cycle.

According to the company, ROBOSTORTER reduces noise pollution and energy costs as it does not use compressed air. In addition, the company adds that ROBOSORTER can increase flexibility and reduce the time of format change from 25 minutes to 3 minutes, while also reducing the space occupied on the ground.

ROBOSORTER can be combined with TIRELLI OSCAR, the capper designed for fitting bottles with triggers or pumps, or with the TIRELLI monoblock SIGMA.

AROL GROUP will present ROBOSORTER at the upcoming Cosmopack in Bologna, from the 28th of April to the 2nd of May 2022.