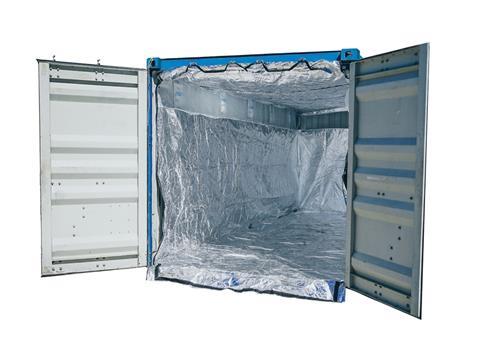 EPG Industries has developed Temcoat Liner Flow, a thermal container liner with a breathable membrane that helps to prevent cargo loss due to condensation by encouraging the flow of humid air away from the cargo area.

EPG Industries says that the Temcoat Liner Flow reduced moisture damage with a technology that focuses on the relationship between temperature fluctuations and condensation formation in cargo care.

The company adds that a breathable cargo environment is particularly important for sensitive cargo such as coffee, which sees extensive losses in transit as a result of condensation. The solution is could apparently also be suitable for other shipping markets such as perishables, pharmaceuticals, and powdered dairy.

According to EPG Industries, the patent-pending design of the Temcoat Liner Flow includes a highly-reflective thermal liner with a breathable membrane that ensures that the dew point is not reached inside the container and encourages the flow of humid air away from the cargo area.

EPG Industries claims that its flagship product, the Vdry Blanket, which was launched in 2012, has significantly reduced condensation damages in high-risk scenarios where desiccants are unable to work at full capacity. Alongside innovating for the supply chain, the company says it has worked to reduce its environmental impact by removing colour dyes from its products.