Corrugated cardboard industry sets out roadmap towards climate neutrality by 2050 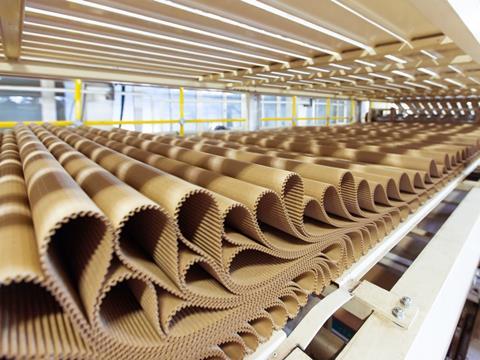 FEFCO has launched its Climate Neutrality Roadmap conducted by Climact, through which the corrugated cardboard sector hopes to achieve climate neutrality by 2050.

It is thought that, when compared to a business-as-usual scenario, taking such actions as improving material efficiency and circularity would reduce the sector’s carbon footprint by 19%, or 3,3 Mt CO2eq, by 2050. Making developments in energy efficiency and the decarbonisation of the energy mix are expected to reduce the footprint by a further 16%, or 2,8 Mt CO2eq.

It is thought that the bulk of reductions must be achieved upstream, especially through the decarbonisation of paper production. If its fossil carbon footprint is reduced by 80% within the next 28 years, FEFCO believes that climate neutrality can be achieved. On that note, a complete phasing out of fossil emissions would take the sector into climate-negative territory.

Collective engagement is also proposed as a route towards climate neutrality and, beyond that, negativity.

According to the roadmap, the sector must implement a stable and predictable regulatory framework to steer investments; an adequate and robust energy infrastructure; policies and measures to enable the decarbonisation of the paper and transport sectors; recycling policies to improve the quality of waste streams; and ensure the availability and affordability of climate-friendly energy carriers. If these conditions are not met, the corrugated cardboard industry says that it cannot reach climate neutrality.

Alex Manisty, chairman of the FEFCO Climate Neutrality Roadmap Steering Committee, said: “The roadmap reflects a credible plan that can be implemented in the required timeframe, and shows the strong will of the industry to build a climate-neutral future for corrugated cardboard.

“Climate neutrality by 2050 is the way that the European Commission foresees its future growth strategy,” added director general Eleni Despotou. “The FEFCO Secretariat considers it a duty to guide and assist the corrugated cardboard industry to enable climate neutrality in its manufacturing operations.”

The goal is said to fall in line with the EU Green Deal, which anticipates the reduction of greenhouse gas emissions by between 80% and 95% by 2050.

Cepi previously challenged the EU’s proposals for the ‘Fit for 55’ legislation aiming to cut the EU’s CO2 emissions by 55% by 2030, arguing that they are ‘contradictory’ and would undermine efforts to preserve forests as a sustainable resource. A subsequent position paper re-asserted that appropriate legislation is needed to ensure that the pulp and paper industry meets the European Union’s net zero carbon goals.

Decarbonisation efforts from industry players include UPM’s new heat and power plant, set to power its Nordland Papier mill and guide the company towards its goal of 65% CO2 emissions by 2030; and Smurfit Kappa’s ‘state-of-the-art’ drying process at its Townsend Hook paper mill, said to have reduced emissions by 5%.