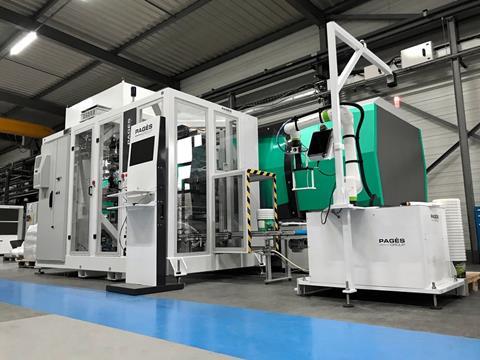 The Thin Wall Integra collaborative project offers a fully automated solution for the high-volume processing of recycled material into thin-walled containers with a material saving of up to 35% and HolyGrail 2.0 compatible labels.

According to the group, the collaboration offers a new one-stop shop concept for the production of thin-walled five-litre buckets. The jointly-developed concept is based on a fully automated injection moulding cell around a hybrid Allrounder 720 H in packaging version with a 1-cavity mould, with a complete cycle reportedly taking approximately five seconds.

The concept also features a handling system with a telescopic arm that engages from the rear side of the machine, where it first loads the mould with the IML labels. The sequentially operating robotic system then removes the labelled buckets and stacks them on a deposit mat, which are automatically picked up by a robot for palletising.

The group says that the combined robot technologies make the system particularly compact, while the recyclate is continuously fed into the machine via an automatic conveyor system.

In addition, the group claims that the product has a proportion of 55% recycled material, with its design enabling material savings of up to 35%. The buckets also offer simplified stackability for savings on space.

The group notes that the buckets also use HolyGrail 2.0 labels, which makes it easier recycle the materials used by type. The HolyGrail 2.0 digital watermarking project began semi-industrial trials in 2021, while its first prototype detection sorting unit was also successfully validated last year.

Overall, the concept is aimed at high-performance packaging applications that require speed, precision, and efficiency, as well as ease of maintenance, according to the group.

First debuted in November 2021, the Thin Wall Integra project was also shown during an open day at Collomb in Oyonnax on the 12th of January 2022.