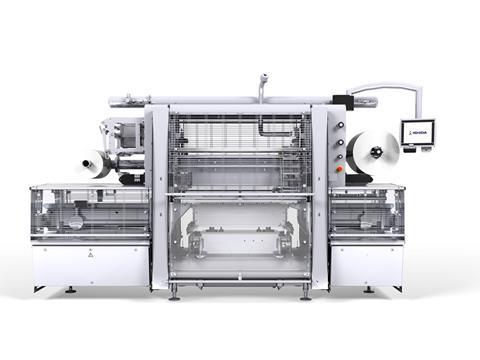 Ishida Europe has extended its range of QX Flex tray sealers with the launch of a new model that it says can meet market demands for a compact, high-performance model that maximises output, capacity, and flexibility for medium to high volume production lines.

The Ishida QX-900 Flex operates at up to 15 cycles per minute with a maximum of seven impressions, delivering a top speed of 105 packs per minute.

The tray sealer is capable of both seal only and MAP (Modified Atmosphere Packaging) trays and can handle a variety of materials and formats, including trays made from recycled or renewable cardboard and mono plastics, and the latest skinpack and skin on board variants.

The QX-900’s compact footprint reportedly means it can function both as a standalone machine or as part of a fully integrated packing line, with the control and timing of up to four filling systems and a denester all accessible through the machine’s Remote-Control Unit (RCU).

Careful control of the outfeed simplifies the interface with downstream equipment. A printer can also be incorporated for batch codes, bar codes, production and sell-by dates, and pricing information.

Other enhancements include a film unwind arrangement which speeds up film roll changes, and a central fixing point for the RCU enables it to be viewed and operated from both sides of the machine.

According to the company, the QX-900 retains all the proven benefits of the Ishida Flex tray sealer range, including a ten-minute tool changeover, with a tooling trolley enabling the process to be carried out quickly and safely using a single operator.

Ninety-nine individual product settings can be stored in the RCU for fast set-up, along with control of vacuum and gas levels for MAP trays. The design of the machine allows full washdown, and its smart belt system means belts can be quickly removed for changeovers and cleaning.

Tooling can be specified to meet individual customer requirements, including both outside and inside film cut (the latter offering superior pack presentation) and the incorporation of peel tabs.

Options include gas mixing and gas analysing with an automatic cut-out should the wrong mix be detected, and Ishida’s unique Head Redundancy feature that enables an impression to be isolated during production in the event of a problem. This allows the machine to continue operating until a suitable time when repairs can be undertaken.

The QX-900 can also be integrated with Ishida’s AirScan which can detect leaks of CO2 from holes as small as 0.25mm in MAP packs at speeds of up to 180ppm.