New Ejector Gets in Sync with Packaging Mould Movement 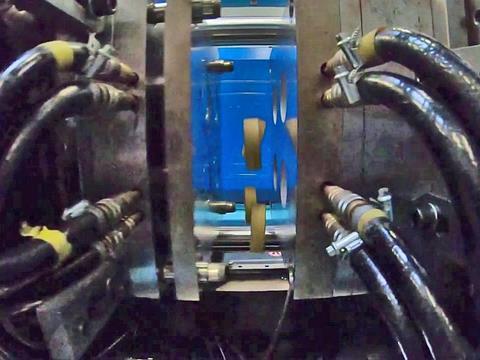 Designed for the company’s newest IntElect series, which has a mould open time of just 0.9 seconds, this latest advancement ensures that components are clear of the mould before it closes again. As well as preventing falling packaging parts being crushed, it helps to mitigate damage to expensive lid and closure mould tools.

The movement between mould open and ejector forward has a big impact on the ejection of the parts. This synchronised programme, installed on the NC5 Plus control panel, enables machine operators to select the ideal setting for the ejection of moulded components to ensure they have cleared the mould space before the moulding cycle starts again.  Nigel Flowers, managing director of Sumitomo (SHI) Demag UK explains: “All-electric moulding cycle times are getting faster and faster. This is great for productivity, especially for moulders that mass produce packaging parts such as caps and closures. In an ideal world, the parts are ejected with zero inertia and drop in a central line out of the mould space. However, when the toggle clamp operates faster than the ejector mechanism, there’s less control over how and where the moulded components will fall.”

If the ejector is slower, the parts may follow the moving mould. Considering that most packaging components are moulded using multi-stack, multi-cavity tools, the top rows may get caught on the lower mouldings as they drop. In cap moulding for example, tool cavity numbers are typically 32, 64 or higher. “The risk is that a component fails to eject and then damages the mould tool when it is closing on the next cycle. Additionally, it increases the risk of damaged mouldings being shipped to the end customer. This means that the timing of the ejector with the mould movement has to be absolutely in-sync,” claims Nigel.

Similarly, if the ejector mechanism operates faster than the mould, parts, which could still be cooling, can ricochet into the opposite fixed mould face. Not only could this result in deformed components, it delays the mould closure and therefore affects cycle time, which is critical in packaging.

Previously, programming and matching the ejector forward speed with the mould open speed was a highly skilled and time consuming process. With Sumitomo (SHI) Demag’s Synchronized Ejector Operation, the control automatically identifies the point at which synchronised ejection can take place. Platen positions and speeds are displayed clearly on the panel touchscreen enabling operators to easily adjust the mould speed to allow the mould and ejector to operate in unison.

Should the mould speed need to be reduced to meet the ejector speed, any loss in cycle time is compensated by eliminating the pause time or by shortening the mould opening stroke, reports product manager Peter Gladigau.

Using a four-cavity lid mould as an example, Peter calculates the difference between an operation that has been synchronised and one that has not. “Although the synchronised mould open time is 0.1 seconds more than when ejector synchronicity isn’t applied, because there is no pause time, it’s actually faster and smoother. Additionally, it allows for continuous operation, thus increasing production productivity,” adds Peter. The Synchronized Ejector Operation is currently only available on new IntElect machines.