MULTIVAC is Expanding its Printer Portfolio 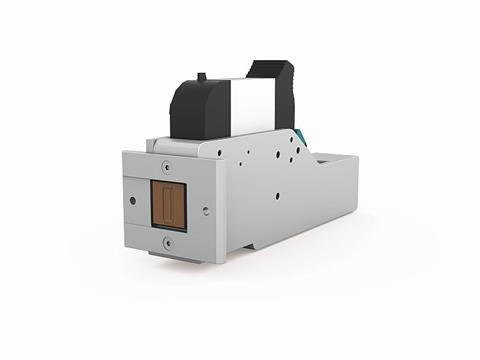 For the first time starting in March 2019, MULTIVAC will be offering a MULTIVAC TIJ printer in addition to TTO printers. It will be able to be used in direct web printers as well as in label dispensers.

In the thermal inkjet process, water in the ink is heated, causing tiny bubbles that squeeze the ink drops from the nozzle to be explosively formed. In contrast to continuous inkjet printers, TIJ printers operate with printer cartridges, in which the printing heads are integrated. The cartridges can be changed easily and quickly and are also very low maintenance, since they do not require any regular cleaning. A further benefit is that the print cartridges do not dry out; the so-called ‘decap time’ is very high. A print resolution of up to 600 dpi can be achieved with TIJ printers, making it possible to accurately print extremely small text and compact barcodes.

Up to now TIJ printers were predominantly used in the medical technology industry, since the water-soluble inks were only suitable for paper or Tyvek®. For printing on the films overwhelmingly used in the food industry, the drying process was simply too long and the adhesion of the ink to the film was insufficient. Since then however, the inks have been further developed, so that they are now also suitable for print substrates such as films and, depending on the type of carrier material, the inks are now smudge-proof within 1 to 3 seconds. In the case of the TIJ printer, up to four printing heads can be operated beside each other on a cascading basis. Each printing head has a print width of 12.7 mm, providing a total print width of 50.8 mm.In addition to being used in direct web printers with propulsion indexers, or in those static models fitted on the infeed or outfeed of a packaging machine, the TIJ printer can also be integrated into any label dispenser. In this case, the printer is installed directly at the dispensing edge. This offers the advantage that up to a lot size of 1 can be printed because there are no labels that have already been printed in the preprint run when the layout is changed.

The new and versatile model from MULTIVAC is available as an option in the IP 65 version, as well as in a zero-downtime mode operating with two printing heads.Operators of this marking solution also benefit from automatic print lay-out management via the MULTIVAC HMI control terminal. When the recipe for a particular product is called up, the correct print layout is also loaded automatically. It is not necessary to manually select a print layout or print data on a separate printer control terminal.

The aspect of marking security is also of crucial importance: thanks to the automatic loading of the layout with the recipe, operating errors can be prevented in advance. The appropriate layout in the right language with the correct barcode and corresponding production data and ingredients list is automatically activated at the printer.