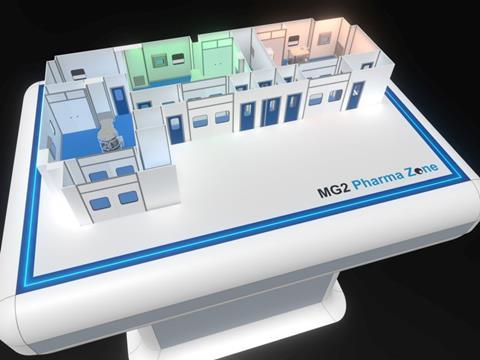 MG is specialized in designing and marketing of capsule fillers and end-of-line solutions. In 2016, MG2 experienced a double-digit increase of both orders and turnover, a trend that will be confirmed again in 2017. interpack represented another milestone in the company's growth process.

Thanks to a turnover increase of 28%, accompanied by orders increase and a policy of expansion, both in terms of recruitment and in terms of research into new markets/technology solutions, 2016 confirmed itself as a year of great growth for the company based in Pian di Macina di Pianoro (BO).

In fact, the company turnover exceeded 30 million euro, by raising up to 38.5, including the US subsidiary MG America turnover. More than 2/3 of sales were achieved in Europe and in North America (more than 37% in the continental Europe, and 30% approximately in USA and Canada), but the company keeps operating on a global scale by expressing great interest in emerging markets such as Asia and Africa where some states show excellent development potential. The importance of Egypt, for example, increased three times between 2015 and 2016. In the Asian area, India is still an extremely attractive market, with a consolidated 5% share in the company's turnover, confirming itself both as a developing country and as a reference market.

Overall MG2 typical customer is a multinational company, looking at export and producing generic drugs. Such a production requires high-speed machines, capable to ensure high quality. In the European area, where MG2 presence is now consolidated, governments policies differently influence the investments of pharmaceutical companies. Currently we face a purchases increase in Great Britain and in the Benelux area, while Germany still remains the first country importing MG2 capsule fillers. For the current year we expect a positive trend: in fact, we foresee again a “double digit” growth, which will be accompanied by further actions in terms of company's development.

Companies are not only made of numbers and machines. MG2, that always paid attention to human resources policies, has indeed planned to raise its staff by 10% by employing young designers and technicians. Furthermore, MG2 is always involved in some projects as partner of other Italian and foreign companies which are focused on the maximisation of the company’s potential, by appealing to its unique know-how, especially in the pharmaceutical process. In particular, projects inspired by the new principles of pharmaceutical production known as continuous manufacturing are very significant.

These projects are being implemented by European and American multinational companies and they require the cooperation of several players of the production chain, starting from machinery/spares suppliers up to pharmaceutical technology/process experts. In the meantime, MG2 goes on focusing on inhalation field where the Company has been the first worldwide supplier of special dosing solutions into capsules for inhalation devices. Important resources are invested in the scientific research in this particular field, not only for the application to respiratory diseases but also for different aims.

Once again, MG2 works with several players of the supply chain: raw material producers, inhalation devices manufacturers, university research centers, CRO (Contract Research Organization) and pharmaceutical companies. During the last year, many investments were made also for the implementation of the Pharma Zone, the new area made up of three cleanrooms, where it is possible to work with active products, under real production conditions. All has been conceived in order to guarantee complete safety both for the environment and for operators. Besides dosage tests, with its Pharma Zone, MG2 can not only further support customers with pre and post sales services, but also execute small batches for R&D, including Pre-Clinical feasibility batches.

MG2 activity goes hand in hand with a dynamic commercial policy which foresees the participation to exhibitions worldwide. The above events include Interpack exhibition which took place in Dusseldorf on last May from 4th to 10th. MG2 introduced itself at this exhibition by displays its atout: an innovative application of virtual reality, created to let the customer make a virtual tour of the MG2 Pharma Zone which allows him to both “touch by hand” its operation principles and understand its potentiality. “Interpack is a “must-have” worldwide appointment for the packaging companies of the pharmaceutical sector which takes place every 3 years. – says Manuela Gamberini, vice-president of MG2 – In Düsseldorf we had an excellent feedback in terms of visitors with whom we outlined a series of projects showing actual development perspectives. Besides, the creation of a virtual reality set allowed to show in a particularly innovative and effective way the potentiality of the Pharma Zone without needing a customer visit to the company plant. The new area set up at MG2 headquarters has already been reserved by some customers to run tests and to produce technical batches in the coming months.

The feedback has been excellent also for the shown machines: our top capsule filler Model Planeta 200, which has been presented in its version with MultiNETT, the 100% capsules net weight control system, confirmed again the existing interest for this machine configuration particularly suitable for low dosage application. Finally, the ACE system for track&trace confirmed itself again as key solution in the scope of the technologies dedicated to the serialization of pharmaceutical packaging, by expressing among its strong points a reduced layout and the possibility of being easily integrated to existing lines.”