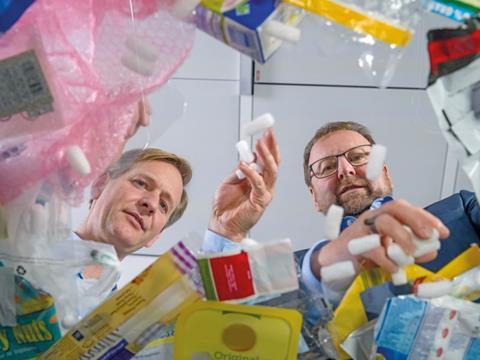 More and more companies from the plastics industry are working on improving the recyclability of plastics and thus helping to create a circular economy. One way that BASF is contributing is the ChemCycling project.

At the end of 2018, the company first used pilot volumes of a pyrolysis oil derived from plastic waste as a feedstock in its own production. At a press conference in advance of K 2019, the world’s largest trade show for the plastics and rubber industry, two packaging partners have showcased the first prototypes that were created during the pilot phase of the project.

Storopack, a supplier of protective packaging and technical molded parts, used Styropor® P Ccycled to make insulation packaging for temperature-sensitive pharmaceutical products as well as boxes for transporting fresh fish and protective packaging for electronic devices. “We were particularly impressed by the fact that Styropor® P Ccycled can be used in food packaging. There are already various recycling options for Styropor, and ChemCycling helps raise the recycling share even further,” said Storopack’s Chairman of the Management Board, Hermann Reichenecker. Storopack and BASF are thus forging a new path in the circular economy.

Südpack, a producer of film packaging in Europe, produced a polyamide film and a polyethylene film that were processed into specially sealed packaging for mozzarella. Until now, multi-layer packaging has usually been considered to be only recyclable to a limited extent. “Film packaging must fulfill important roles: product protection, hygiene and shelf life while using a minimum amount of plastics. That is why it is made up of several materials and layers with various properties and barriers. Through innovations such as ChemCycling we come closer to solving the problems associated with recycling of flexible packaging,” said Johannes Remmele, Managing Partner of Südpack.

“With the ChemCycling project, BASF is aiming to process pyrolysis oil derived from plastic waste that currently cannot be recycled, such as mixed or contaminated plastics. If we are successful in developing the project to market readiness, ChemCycling will be an innovative complement to existing processes for recycling and recovery to solve the plastic waste problem,” said Stefan Gräter, head of the ChemCycling project at BASF.

The significant potential of chemical recycling was confirmed by the consulting firm McKinsey in a December 2018 study: If established recycling processes are combined with new ones such as chemical recycling, the experts believe that a 50% reuse and recycling rate for plastics worldwide can be reached by 2030 (today: 16%). The share of chemical recycling could then rise from 1% currently to around 17%, which is equivalent to recycling of around 74 million metric tons of plastic waste.

To move from the pilot phase to market roll-out, however, various issues will need to be resolved. The existing technologies for transforming waste plastics into recycled raw materials must be advanced and adapted for the use at industrial scale, in order to ensure the consistently high quality of the pyrolysis oil. BASF is currently investigating various options for supplying the company’s Production Verbund with commercial volumes of pyrolysis oil in the long term. Besides the technical issues, economic aspects also play a role. For chemical recycling to find acceptance in the market, regulators must also recognize the process officially as recycling. Within this framework, they have to define how chemical recycling and mass balance approaches can be included in the calculation of recycling rates required by law.

Responsible use of resources

“Our ChemCycling project is a good example of how BASF is working with partners on solutions to the key challenges of the 21st century,” said Dr. Andreas Kicherer, sustainability expert at BASF. Besides ChemCycling, BASF is involved in many other projects and initiatives that strengthen the idea of the circular economy and prevent plastics from entering the environment. For example, BASF’s product portfolio includes ecovio®, a certified compostable plastic partly based on renewable raw materials. BASF is a member of the World Plastics Council and takes part in two Ellen MacArthur Foundation programs. At all of its sites worldwide, BASF implements “Operation Clean Sweep,” an international initiative of the plastics industry aimed at preventing the loss of plastic pellets into the environment. Furthermore, at the beginning of 2019, BASF joined forces with around 30 other companies to found the Alliance to End Plastic Waste (AEPW). In the coming five years, this initiative wants to invest up to $1.5 billion in various projects and partnerships, mainly in Asia and Africa. There are four main focus areas: developing infrastructure for waste collection, promoting innovative recycling methods, education and engagement of various groups and cleanup of concentrated areas of plastic waste in the environment.