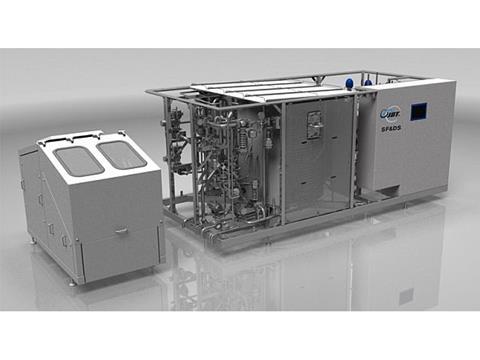 JBT Corporation has announced the launch of the SteriCompact processing system, the latest in the company’s Sterideal® HX UHT range of systems, which has been specially adapted to meet demand for smaller pack sizes in emerging markets.

The SteriCompact UHT, which is based on JBT’s Sterideal HX UHT system, will cater for the move towards reduced scale milk and juice production and pack sizes in developing economies, as well as specialized products in high-end markets. Already in the process of being installed with processors in Brazil, Thailand and India, the system is designed for a smaller volume production in smaller packages – of down to 80ml – than has been common in most markets to date.

Bram Bergsma, Product Line Operations Manager for Processing Systems at Amsterdam-based JBT Food & Dairy Systems, said: “In countries like India and Brazil, there’s a trend for smaller filling capacity machines and packaging. These are countries with large populations, but where people don’t necessarily have the income to afford the larger packs. The SteriCompact UHT has been developed for these markets.”

As well as standard dairy applications, the system, which handles lower-range capacity production of 2000-4000 liters per hour, can be configured with optional modules to process Extended Shelf Life milk, juices with small fibers and soy products. The SteriCompact UHT is designed around one central skid containing all the process components including the electrical system, which results in reduced installation time and cost.

However, in addition to emerging markets in Asia and Latin America, the system has also attracted attention in Europe and the US. “We’ve received significant interest from Spain and the US for smaller capacity lines for smaller batches,” said Bergsma. “This is for products produced in small amounts where the flavor can change frequently, so having the SteriCompact UHT in place will help avoid waste.”