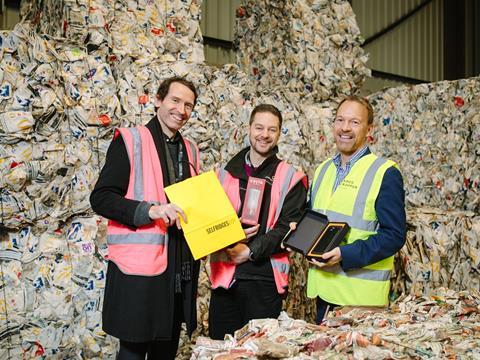 The delivery marks a significant step in the papermaker’s ambition to help recycle some of the estimated three billion take-away cups that are currently thrown away in the UK each year. Through its unique  CupCycling™ technology - the world’s first process dedicated to upcycling disposable coffee cups – James Cropper has the capacity to upcycle 500 million used coffee cups.

Forge Recycling has collected 159,000 single-use coffee cups - from workplaces, coffee shops, universities, shopping centres and on street cup bins - since launching on 18thOctober 2018. Instead of the cups going to waste they have been delivered to James Cropper for upcycling.

Running until March 2019, the pilot runs alongside the #LeedsByExample campaign and seeks to improve the ‘on the go’ recycling infrastructure for coffee cups, and other packaging such as plastics and cans, for consumers in Leeds. Waste is collected by Forge Recycling, which has introduced a new paper cup collection service in parallel. Focusing on closed loop systems, Forge Recycling has performed a cup collection service for Leeds University and Leeds Beckett University.

With the help of James Cropper, all 159,000 cups collected will be given a second life as beautiful papers and packaging. The delivery will make its way through James Cropper’s CupCycling facility - which launched in September 2017 – and has already upcycled over 30 million disposable cups.

James Cropper Chairman and CEO Phil Wild said: “With the capacity to upcycle 500 million coffee cups per year we welcome the thousands of discarded cups brought to Kendal today and hope this is just one of many local initiatives we can support to meet the capacity that we have. This scheme demonstrates that with the right infrastructure, great in-roads can be made to tackle the coffee cup issue.

“There needs to be a change in mindset in how we handle waste and source materials, and ensuring packaging is easy for consumers to recycle is key to this. The delivery marks a pivotal moment for recycling in the UK – and for us, it’s a step towards realising the potential of our CupCycling capabilities.”

A host of major brands, such as such Asda, Coca-Cola GB, Costa Coffee, McDonald's, Pret a Manger, Starbucks and Shell, have joined Hubbub’s #LeedsByExample initiative to date. While the trial in Leeds ends in March 2019, Forge Waste & Recycling estimate that the number of coffee cups it could deliver to James Cropper in one year from Leeds alone could exceed one million – a fantastic example of the circular economy in action.

Gavin Ellis, Director at Hubbub, commented:“It’s not widely understood by consumers that coffee cups have to be recycled via a different waste stream, which is why we focus on developing infrastructure and communications in cities that make it easier for people to recycle properly while on-the-go.

“Almost three billion coffee cups go to waste every year. While the results of the trial are just the tip of the iceberg, they do demonstrate that with the right infrastructure and partners, coffee cups can become a profitable waste stream. Our goal is to extend the activity to include further cities in 2019 and encourage more waste companies to take inspiration from Forge and explore how they can adapt their operations to benefit from this valuable resource.”

Sam Goodall, Operations Director Forge Waste & Recycling said:“In just three months we’ve quickly moved from collecting very few cups to nearly two-hundred-thousand that are ready for delivery to the James Cropper mill. The pilot shows that the potential for our work with Hubbub and James Cropper to transform UK waste and embed circular economy thinking when it comes to coffee cups in cities is very real.”

The CupCycling process involves removing the plastic coating that makes take-away cups waterproof, while preserving the precious paper fibres and instead of going to waste, the cups are transformed into fine papers for consumer packaging such as the iconic yellow Selfridges carrier bag.

Going a step further, James Cropper’s latest innovation in  plastic-free packaging – COLOURFORM™ – uses paper fibre from renewable forests, as well as used coffee cups to create moulded packaging. With over 173 years’ worth of experience in papermaking behind it, COLOURFORM was a natural evolution for James Cropper, offering brands like LUSH, and in turn consumers, more choice. The packaging is recyclable and biodegradable, which means that even if it is not recycled, it breaks down without any harm to the environment.

Phil Wild concludes: “We’re incredibly proud to work with Forge and Hubbub, who have successfully delivered a game-changing system which can help usbecome a nation that truly creates value from waste. We encourage more cities across the country to explore how they can adopt this pioneering initiative.”