Is blockchain the key to a secure supply chain? 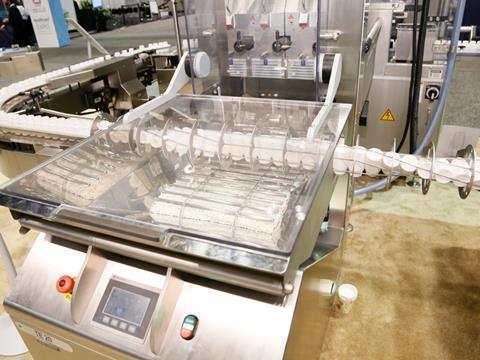 Three experts share their insights into the use of blockchain as an avenue to counter disruption in the supply chain and more.

The epidemic of counterfeit pharmaceuticals entering the supply chain is a serious cause for concern. Repercussions may include lawsuits, damage to a brand image and worse - health-related incidents. This issue has left pharmaceutical companies in search of serialisation methods to counter discrepancies found throughout the supply chain. As these companies look to increase security at multiple touchpoints, many rely on technologies that enable track and trace and one possible solution with innate tracking capabilities stands out as a strong defensive measure: blockchain. However, blockchain is still in its infancy and implementation of this new technology poses its own challenges to the current digital infrastructures of many pharmaceutical companies.

Keeping up with the counterfeiters

With counterfeiters becoming more advanced, the difficulty increases in distinguishing real products from imitations. Often, expired products are stolen, repacked and relabeled with falsified dates and dosage information. Merely examining packaging and corresponding labels is no longer enough to verify the authenticity of a product, especially as machinery used to repackage these products is often as sophisticated as what original manufacturers utilise.

As a result, pharmaceutical companies - alongside manufacturers from many other industries - are turning their attention to blockchain as a possible solution to create an easy-to-follow trail of verification. Successful implementation of blockchain solutions can prevent haphazard drugs from entering the system by verifying each transaction along the supply chain and securely storing product information. However, real world application is still in a concept phase. While this technology may prove to be a viable way to track and trace a product, pharmaceutical companies may hesitate to implement due to the wide availability of product information to anyone in the supply chain with access to the network.  Still, blockchain could serve as a viable solution to assist in combating the growing epidemic of counterfeit drugs so long as advancements to the technology and process alleviate those concerns. In the meantime, pharmaceutical companies are putting their eggs in multiple baskets by exploring other methodologies for counterfeit prevention, including the use of covert tags with radio frequency identification technology (RFID), bar codes or web portals which are checked when they arrive in the facilities. This helps companies verify the authenticity of their product once it arrives after distribution.

In 2013, the Federal Drug Administration (FDA) announced the Drug Supply Chain Security Act (DSCSA) to strengthen the impact of serialisation. To meet the FDA’s new requirements, many companies began pilot tests using cameras to track packages with an embedded code enabling traceability. However, companies struggle to create a system without established industry standards to follow. To address this hurdle, the FDA continues to work to implement other provisions to the DSCSA to serve as additional guidelines for serialisation, but validation exercises could take months or even years - and the resulting solutions may not enable easy consumer verification of product authenticity in the way that blockchain could.

Acceleration to implementation via the DSCSA?

The appeal of blockchain lies in the creation of a trusted network resting on a cloud-based environment that is nearly impossible to hack. Many companies in pursuit of a higher level of supply chain security struggle to obtain that standard. In fact, only 15 percent of manufacturers in Europe reported that they would be able to meet the deadline with an appropriate serialisation process mandated by the EU Falsified Medicines Directive (FMD)[1] in 2017. Some companies addressed this command by developing exclusive internal systems to combat the issue of counterfeiters. However, such systems are still susceptible to hacking due to their reliance on passwords for data entry.

Although blockchain is still in its infancy, its potential to improve serialisation has not gone unnoticed. In enforcing the DSCSA, the FDA has begun calling for pilot programs using blockchain technology[2]. This could inspire the implementation of blockchain within the next five years. It is possible that by 2023, blockchain technology may no longer be referred to theoretically in the pharmaceutical industry but rather in realistic terms. In the meantime, suppliers of printing and labeling solutions are ready, willing and able to aid in the implementation of blockchain to advance the security of pharmaceutical supply chains.

Weighing all the considerations

Companies addressing counterfeit pharmaceutical issues can consider both serialisation and non-serialisation anticounterfeiting methods. Non-serialised methods include hard-to-forge markers on either the drugs or packaging to authenticate products. The DSCSA mandates serialisation to combat counterfeits. As directed by the act, as of November 2017,[3] all pharmaceutical in homogenous cases were supposed to be serialised and compliant with the FDA’s Standardized Numerical Identification guidance. This is still the law, but enforcement was postponed. The law also requires that by November 2019, wholesalers will accept only serialised pharmaceuticals and by 2020 dispensaries must also only accept serialised pharmaceuticals. It remains to be seen in what timeframe these requirements will be rigorously enforced.  An assessment by GS1 in October 2018 found only 20% of pharmaceuticals were fully compliant.

While blockchain may eventually offer a solution for establishing a secure traceability process for pharma, many companies are forging ahead using other, existing, much more mature and proven technologies for serialisation and traceability. Additionally, the blockchain data structure is extremely slow for searching. The use of blockchain for traceability will require a shadow database, optimised for searching, when that is required such as when there is a product recall, or to find the chain-of-custody for a particular serialised unit. In fact, users will need to combine blockchain with a number of other technologies to achieve the desired results. Blockchain does provide strong ‘immutability’, meaning that once written, the data can never be modified. That provides a very robust audit trail that can help deter fraud in the supply chain.

[3] Enforcement was postponed until November 2018