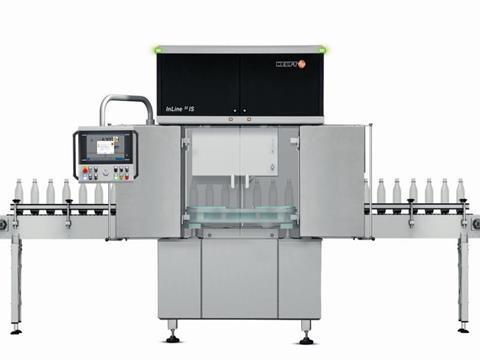 The new standard for the continuous complete inspection of empty bottles on a HEUFT level could be experienced at drinktec for the first time with the HEUFT InLine II IS.

Three systems of the new generation are now available together with the latest version of the X-ray assisted premium system and a compact entry-level device – for different performance ranges, quality expectations, requirements and installation positions.

HEUFT sets the standards regarding the inspection of empty bottles. The technology leader has transferred the best of a premium device which achieves verifiably unprecedented records regarding its detection and rejection reliability to a completely new state-of-the-art system:  the HEUFT InLine II IS.  This time three innovative empty bottle inspectors were presented at drinktec at the same time which are based on the HEUFT SPECTRUM II the universal platform for networked, highly automated and self-explanatory devices of the new generation together with the further optimised HEUFT InLine II IXS X-ray assisted premium model and the compact HEUFT InLine II IR for newcomers.

A specific rotation and fine adjustment of each individual bottle for eight views in each case and therefore considerably more than a 360° coverage during the camera-based sidewall inspection with double resolution, unparalleled precision during the base, underchip, thread, finish and sealing surface inspection with high performance optics and HEUFT reflexx² image processing capable of learning, fully integrated, optimally arranged and safely encased detection modules including residual liquid detections ... automatic brand and program changes ... full HEUFT SPECTRUM II performance and extensive audiovisual HEUFT NaVi assistance ...:  almost everything relating to the best values which our premium empty bottle inspector achieved during a benchmark test under realistic filling conditions carried out by the Versuchs- und Lehranstalt für Brau – VLB (Research and Educational Institute for Brewing) in Berlin regarding detection performance and false rejection rate is also in our brand-new HEUFT InLine II IS.

However only the further optimised HEUFT InLine II IXS has the unique pulsed X-ray technology to offer for the highly precise identification of very specific safety risks such as minute glass splinters in residual liquid.  Yet whether inclusions, cracks, chips, scuffing, foreign objects or contamination:  the new state-of-the-art system for the full inspection of all empty bottles achieves an absolute peak level as far as the detection performance and the share of incorrectly rejected good bottles are concerned.However it did not stop with transferring and optimising proven technologies in the case of the HEUFT InLine II IS.  It received a completely new mechanical construction at the same time based on customer requirements:  open, easily accessible and with neither frame nor machine table the new HEUFT CleanDesign reduces the cleaning and maintenance of the HEUFT InLine II IS.  All the detection modules are enclosed, adjustable by motor and fully integrated as with the premium system.  Even the HEUFT fluid residual lye detection which previously had to be placed outside is now completely integrated.  Despite this the new product is compact and easy to place along existing filling lines.

Whether premium or standard:  both systems are based on the latest release of the HEUFT SPECTRUM II platform.  The in-house developed central control unit with a renewed increase in computing power, even more precision during specific product tracking and the audiovisual HEUFT NaVi user guidance makes the devices of the new generation more automated, networked, self-explanatory, operationally reliable and tamper-proof than ever before.

The brand-new HEUFT SPECTRUM II version of the long-standing benchmark regarding empty bottle inspection will be presented especially for smaller bottlers such as craft brewers or medium-sized wine producers, twice in different versions:  the new affordable HEUFT InLine II IR will demonstrate in the wine rotary system how a precise base, finish and thread inspection is achieved on less than one square metre of floor space.  The system exhibited in its own empties area only needs a little more space in order to additionally carry out a continuous inspection of all the surfaces of each individual bottle.