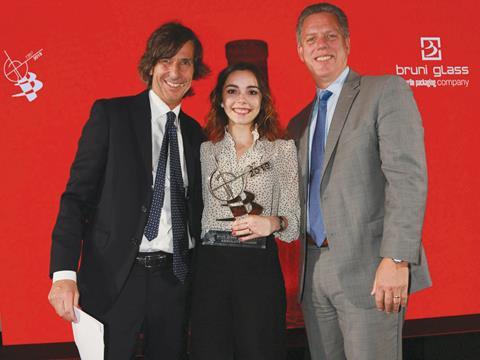 The 15th edition of the Bruni Glass Design Award, an international design competition focused on glass packaging, concluded on Thursday 21 November with a private ceremony at the Magna Pars Suites Hotel in Milan. The competition was established in 1997 by Bruni Glass SpA, a distributor of packaging in Europe, which is now part of the Berlin Packaging Group.

The contest lasted 8 months and involved 6 European and international design schools: The Polytechnic University of Milan, the Münster University of Applied Sciences in Germany, Purdue University in the United States, IED in Madrid, IUT in Reims, France and UCSF University in Argentina.

Hundreds of competing projects were selected by the company, according to the criteria of “idea” and “producibility”, for the following four sectors: Spirits, Wine, Gourmet, and Home Fragrances. Visitors to the Bruni Glass stand at SIMEI (where the finalists’ works were exhibited) had the final word.

The winners were as follows:

The Bruni Glass Awards are entirely financed by Bruni Glass and run by the Bruni Berlin holding company. The prize consists of basic remuneration for the project and the possibility that the designer’s work will be marketed, with 10 years of royalties.

CEO of Bruni Glass, Paolo Recrosio, commented: “The Bruni Glass Design Award has become a kind of institution that we are proud of because it fully represents our founding values: innovation, talent, and creativity. The young designers competing this year – who we must remember are still students – impressed us with their creations, which are extremely original, yet functional and marketable at the same time.”

He continued: “The gala evening was truly thrilling, and was attended by more than 250 guests, including many customers and suppliers, who are ultimately the main beneficiaries of all this creativity.  Indeed, it is no secret that many of the works presented in recent years have been chosen by our customers and have gone on to enjoy market success. We are confident that this 15th edition of the award will also be a source of great satisfaction in this regard.”