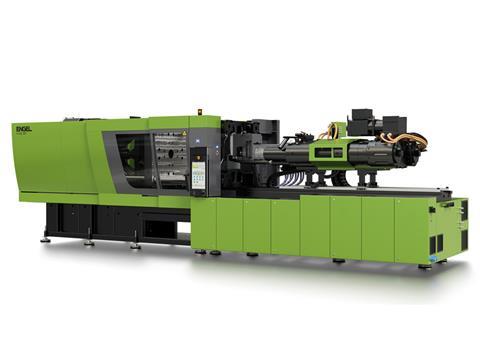 ENGEL has launched the latest in its series of all-electric e-cap injection moulding machines – the e-cap 380.

The company argues that the requirements for beverage caps have changed substantially since the launch of its first all-electric e-cap injection moulding machine at K 2010.

As Friedrich Mairhofer, Product Manager for all-electric injection moulding machines at ENGEL, explains: “For still water, caps with a weight of significantly less than one gram are produced today. As a result, cooling and cycle times have continued to drop. Where the cycle times ten years ago were still 2.5 seconds, today's cap machines need to be able to produce at 2-second intervals and faster.

"When developing the new generation of machines, the main focus was, therefore, both on performance and on stability. The new e-cap achieves even faster mould opening and closing movements and is designed with an even more stable machine bed for more frequent load cycles.”

The reinforced frame and the reinforced mould mounting platens on the new e-cap reportedly ensure excellent stability of the machine movements even with extremely short cycles and very small shot volumes.

Dry cycle times of 1.3 seconds with the e-cap 380 and the parallel movements included in the standard right from the outset make an important contribution to achieving apparent cycle times of less than 2 seconds. Ejection occurs parallel to the mould opening. A new feature means that the ejectors can be amplified by a switchable hydraulic booster on demand. ENGEL argues that this ensures that the machine operates with the best possible efficiency both during running production and during start-up after a production interruption.

The new e-cap generation is offered with two different ejector drive technologies. The machine works with hydraulic ejectors as standard. Servo-electric drives are available as an option, which reportedly require around 10% less energy.

The plasticising unit was completely redesigned in the course of the e-cap's further development, as the properties of the materials to be processed have also changed over time.

ENGEL says that cleanliness and energy efficiency have also been essential characteristics of the series right from the outset. With an encapsulated toggle lever and a “very clean” linear guide of the moving platen, the new machine can apparently reliably meet the requirements of strictly regulated production in the food industry.

As a system supplier, ENGEL claims that it precisely coordinates all the components of the production cell right from the start of the project. “This allows us to fully leverage the efficiency potential throughout the entire production cell,” Mairhofer emphasises.