ENGEL Automation on Show at Fakuma 2017 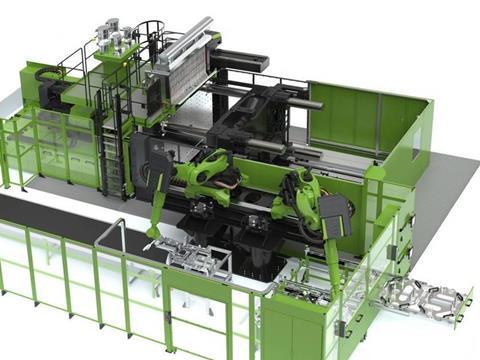 At Fakuma 2017, which takes place in Friedrichshafen, Germany, from October 17th to 21st, ENGEL will showcase its expertise in automation at a special Expert Corner.

On show, among others, will be the small e-pic B and e-pic Z robots – integrated and with expanded software functions –, the new viper 20 speed for high-speed medical and packaging applications and the new 10” hand-held touch terminal, which makes its exclusive world premiere at the Fakuma event.

At Fakuma 2017, ENGEL will present the integrated version of its e-pic robots for the first time, clearly illustrating how efficiency potential can be maximised by combining injection moulding machines and robots. Within the integrated solutions, the CC300 control unit for ENGEL injection moulding machines becomes the main operating panel of the whole manufacturing cell; this means uniform parts data and alarm management as well as a unified look and feel. Consistent operating logic significantly simplifies activation and programming as well as control of robots and the manufacturing cell as a whole.

Integration is a key feature of ENGEL solutions. Since ENGEL supplies injection moulding machines and robots from a single source, the individual components of the manufacturing cell are seamless from a process control and mechanical viewpoint. Injection moulding machines, robots and other peripherals, such as conveyor belts, sprue chutes and protective covers, are coordinated in the design and arranged to be as space-saving as possible. Integrated manufacturing cells also ensure maximum security. A CE certificate will be obtained for the overall solution.

Of course, all ENGEL robots can be integrated subsequently to injection moulding machines via the EUROMAP 67 interface, regardless of the machine brand. No modifications to the injection moulding machine are required to connect the e-pic robots.  Efficiency control reduces energy consumption and weare-pic robots, the latest products in ENGEL’s automation range, are offered in two versions: as linear pick-and-place robots (e-pic Z) and servo sprue pickers (e-pic B).

The main feature of the e-pic series is the robots’ lightweight swivel arm in place of a conventional x-axis. This completely new kind of kinematic system – a USP of ENGEL – significantly increases the dynamism and energy efficiency, reduces maintenance effort and enables a highly space-saving installation on the injection moulding machine. The swivel arm requires less space than a linear axis when moving towards both the injection and clamping sides; it also works around obstacles, such as core pulls or slides, quickly and easily. Operating the e-pic robot is therefore no more complicated than operating a linear robot. The control unit converts rotary movements into linear movements.

In a new development for Fakuma 2017, ENGEL will be equipping its e-pic robots with efficiency control. The robots use the software to adapt the speed of their movements to the injection moulding process, thereby reducing energy consumption and raising the lifespan of mechanical components. Efficiency control has been an established feature of viper linear robots for years.  viper 20: now even fasterThere will also be a premiere for viper linear robots at Fakuma. The new viper 20 speed offers removal times of well under 1 second. The enhanced servo-electric drive technology and the reduced weight of the robot’s axes are responsible for the step up in performance. Developed for applications with total cycle times of around 4 seconds, the viper 20 speed is mainly used in the medical and packaging sectors, areas in which top-entry robots tend to offer very high flexibility. The new ENGEL viper 20 speed will demonstrate its impressive performance by handling cups at the Fakuma event. It will work in tandem with an ENGEL easix multi-axis robot that will take the cups from a moving conveyor belt and stack them.

In this application, both robots – the viper linear and the easix multi-axis robot – are integrated into a CC300 control unit. It makes no difference whether the CC300 is controlling linear or rotary axes. The additional movement instructions for the multi-axis robot integrate seamlessly with the graphical interface, which simplifies operation significantly. To allow for simple and fast parameterisation despite the complexity of the overall system, the control unit provides different user levels, from a simple view to a fully object-oriented visualisation of the sequence.  10” for easier operationAnother highlight of ENGEL’s Automation Expert Corner will be the new 10” hand-held terminal C10 for robots in the ENGEL series; this will replace the 7” units in the C70 series in the year ahead.

Visitors to Fakuma 2017 can look forward to an exclusive preview. The new hand-held terminal will provide a much clearer layout, simplifying operation considerably.  ENGEL automation still growing stronglyInjection moulding production is facing increasingly complex challenges owing to the pace of market development. Around the world, ENGEL is offering customers solutions that address the required degree of automation precisely, from standardised robot cells to made-to-measure system solutions. A consistent robot portfolio and the automation expertise of ENGEL specialists supply the basis for the high degree of flexibility. “In an ongoing project, we are integrating nine robots of different types,” says Walter Aumayr, head of the Automation and Peripherals division at ENGEL AUSTRIA. “Demand is rising for very complex automation cells to be used in highly integrated production processes.”

To meet the individual requirements of processors and address the particular characteristics of its various national markets, ENGEL has its own automation centres in Austria and Germany as well as China, Korea and the USA. Of the 6,000 ENGEL employees around the world, more than 500 are devoted to automation technology – a number that will continue to rise. “We are hiring a lot of new employees for automation,” confirms Aumayr.

Over the past five years ENGEL has doubled its turnover from automation projects; the area of special automation was developing especially strongly with growth rates of 30 percent on average. “The trend shows no sign of slowing down,” says Aumayr. “ENGEL automation will continue to achieve strong, double-digit growth rates.” ENGEL at Fakuma 2017: hall A5, stand 5204